“Religious to Excess”: The Ancient Egyptian Worldview of Polytheism and Piety

The View from Postmodernity

What is it about ancient Egypt that captures our hearts and fascinates us through the millennia?

We are impressed by the scale and the beauty of the ruins and the archaeological artifacts—they’re grand, opulent, and instantly recognizable. They speak of symmetry and order. Indeed, the homogeneity and stability of Egyptian culture seem endowed with a sense of repose in their timelessness—two traits we definitely lack in our postmodern world of rapid change and uprootedness. As Egyptologist Emily Teeter explains:

“What is startling, and illuminating, about Egyptian culture is its longevity. For more than three thousand years, the Egyptians maintained generally the same outlook on the world, making theirs one of the most conservative and unchanging societies yet known. Reverence for the past was a major feature of the Egyptian mind, and one that had enormous impact on culture and religion. Texts relate that the condition of the world at the beginning of time was fresh and perfect, because the gods created it so. To modify those early forms, or to discard them, was not seen as ‘progress’ but as a corruption of the state of perfection. Recalling the past through physical imitation of its patterns was seen as an important element in preserving continuity and predictability and hence in preserving an orderly society. This perspective helps maintain the remarkably faithful retention by the Egyptians of the earliest manifestations of their culture, such as the crowns and dress of their kings, and the styles of their architecture and art, all of which emerged during the early Old Kingdom and continued to provide the framework for their culture, with modest modifications, for three millennia” (Religion and Ritual in Ancient Egypt 13).

The Egyptians’ deep religiosity affected everything in their culture: government, education, commerce, the arts. More than that, their religious beliefs were essential and largely unquestioned presuppositions underlying the conduct of life. By contrast, postmodern Western societies celebrate a secular humanism and many people are atheists or agnostics. People look at religion as tangential to their lives (meaning that people who profess to be devout in their religious tradition are viewed with distaste if not outright derision). We value abstract thought and demand consistency in religious thinking. The ancient Egyptians, however, favored non-exclusivist thinking and preferred concreteness in everything, grounding theological concepts in everyday observations of the natural world (e.g., the annual flooding of the Nile as a symbol of divine favor and renewal). “There were many gods and they were immanent in nature. Only on this basis could the Egyptians combine a profound awareness of the complexity of the phenomenal world with that of a mystic bond uniting man and nature” (Frankfort 25).

That sense of unity was literally rooted in the earth, in Kemet--the blessed black soil of the Two Lands (Upper and Lower Egypt). The Egyptians did not feel that their country was just a piece of land which they happened to occupy. “The bond between them and their land was as singular and as strong as the bond of blood, and even political institutions were involved in a feeling of unalterable rightness” (Frankfort 30).

We live in a fragmented, mobile society where, whether by economic necessity or personal preference, we forsake the land of our birth and procure homes elsewhere, homes that have lost their spiritual significance as the anchor of a family’s line passed down from generation to generation and instead become disposable commodities. We treat everything–people included–as disposable commodities, in fact, and the vast collective sense of soul loss this causes in us encourages us to chase after yet another ephemeral distraction. We say we’re a materialistic society but that’s not true because we don’t actually value material objects; we live in a throwaway society.

Clearly, the world needs to be improved, and if we’re religious in the postmodern West, we believe the world will be transformed by being obedient to the revealed will of the Abrahamic God; by contrast, the ancient Egyptians believed the world is already perfect and it needs to be maintained against the encroaching forces of chaos that wish to undo it. Hence the need for stabilizing by governmental imposition of order from above, the need for having a semi-divine king. Ordered creation (ma’at) had to be constantly affirmed against the forces of disorder (izfet). Not only the king and humanity but the Gods were also involved in this enterprise.

How the Ancient Egyptians Viewed Their Gods

The abundance of artifacts and evidence from the literature show us in great detail how the ancient Egyptians thought of their Gods. Here are the key features as I’ve found them, ones which, as a Kemetic polytheist today, I find myself aligning with and endorsing from personal experience:

The Gods also appeared in dreams to their devotees to offer advice and comfort. One of the best-known tales of contact with a God through a dream was Prince Thutmose (18th Dynasty), who took a mid-day nap under the Sphinx at Giza. The Sphinx spoke to Thutmose in a dream and promised the prince he would become king if he (Thutmose) were to clear away the sand from the Sphinx’s face. As with so many examples of human interaction with the Gods, here is a quid pro quo—the individual received something in exchange for a service to a God. “Gods were revered, buy they were also seen in practical terms as patient problem-solvers and mediators who could be counted on for help as long as they were revered, maintained by offerings, and shown proper respect through prayer and veneration” (Teeter 76).

“Even if towns and provinces chose one deity as their emblem, or declared Ptah or Khnum supreme, the germs of numerous cults were present everywhere. Many of these were more or less explicitly adhered to throughout the land. These common cults—of the sun, of the falcon, of cattle—represent, in the field of religion, the unity of the Egyptians, which is equally tangible in the fields of linguistics, archaeology, and physical anthropology. Thus the teachings of the great theological centers presented, to the country at large, not alien doctrines but clarified insights in which the potentialities latent throughout Egyptian polytheism were realized” (Frankfort 21).

As legally ordained clergy in the Fellowship of Isis, I’m expected to serve for the rest of my life the triad of Goddesses Who have claimed me, and Whom I’ve named as my Patrons: Nephthys, Bast, and Hekate Khthonia.

My Hekate altar the night of Dark Moon this past Thursday night, featuring deadly nightshade and other lovely plants picked from the cemetery.

Aside from honoring those Goddesses, I also serve a vast number of other Deities and spirits, including my ancestors. My 1,200 sq. foot condo houses no less than 20 active shrines. A good part of my weekly budget goes toward procuring the needed offerings for these shrines, from food and libations to flowers, and of course, incense and candles. I spend a lot of time engaged in prayer, ritual, and in maintaining each shrine (I’m a Virgo so you know I’m anal about cleaning anyway, but tidy altars are non-negotiable!). The work, the service, fulfills me at a very deep level. Even when I didn’t have other humans living under the same roof with me, I’ve never felt “alone” because of the plethora of vibrant “links” to these very active Powers in virtually every corner of my home.

I love encountering other people who share my devotional sensibilities, even if it’s obviously not to the same degree that I illustrate mine. But when I go to a Pagan or polytheist friend’s home and I see lovingly tended altars to Powers, my soul sings. When I travel to Pagan Spirit Gathering with my mobile shrine units (MSUs) in tow and my neighbors adjacent to my tent or any curious onlookers ask if they can join me in prayer to the Kemetic Gods and to Hekate because they’re moved by the beauty and the power of the shrines and by my public displays of piety in them, I feel that I’m fulfilling my true calling in this life. 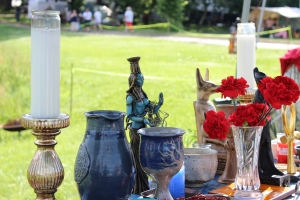 Shrine honoring Nephthys, Anubis, and Horus I brought with me to PSG last year. My neighbors and passers-by frequently joined me during my daily devotionals.

Increasingly, I’m wanting to seek more of my own kind. I want us to host more public gatherings, to educate theists and non-theists on what we’re about, on why we’re more than deserving of claiming our space at the table of the World’s Great Religions (yanno, we were kinda here first!). I’m dedicated to supporting my fellow polytheists in whatever way I can, from conferences like Many Gods West to standing in solidarity at a local level with Heathen, Hellenic, Religio Romana, Celtic and others’ workshops at Chicago Pagan Pride this September (and I hope they’ll come to mine that day!). I want to learn about the Gods and Spirits worshiped by my peers, I want to hear the hymns of praise and raise the mead horn in tribute, eat the ritual foods.

I want to have their stories shared in Isis-Seshat magazine: the Summer issue’s theme is “Powers and Practices.” As Executive Editor, I’m passionate about collecting the narratives of which Powers people have felt called to worship, why they do so, and how they do so. I want to see a diversity of Powers honored reflected in the content–not just the Neteru of Kemet. Please consider sending your essays to me; the deadline is July 27. The issue will go into production in early August, as the Egyptian New Year gets underway! Email me at hekua dot yansa at gmail dot com.

Thank you and blessings to you! Senebti! (Be well!)

4 thoughts on ““Religious to Excess”: The Ancient Egyptian Worldview of Polytheism and Piety”