The 2nd Epagomenal Day: The Birthday of Heru-Ur (Horus the Elder)

According to the nineteenth-century Egyptologist E.A. Wallis Budge, the hawk was probably the first animal that was worshiped throughout ancient Egypt (The Gods of the Egyptians, Vol. 1, Ch. XV). When you consider that along with the polytheistic cultic focus of what the Egyptians called the Njwty, the “local God”, it helps make the discovery of the profusion of Horus Gods in ancient Egyptian religion a little less baffling.

Budge details the Names, characteristics, and chief cult centers of no less than 15 well-known Horus Gods, though there were countless Others. However, most Kemetic Reconstructionists today tend to recognize and honor two: Heru-Ur, or “Heru the Elder/Heru the Great” (Haroëris to the Greeks), and Heru-pa-Khart (Harpocrates to the Greeks), or “Heru the Younger,” Son of Isis and Osiris. The second of the five Epagomenal Days separating the end of the old year and the beginning of the new celebrates the birthday of Heru-Ur, Who, according to Plutarch, is the Son of Geb and Nut just as Set, Nephthys, Isis, and Osiris are too. (Alternately, according to older Egyptian texts, He is the Son of Ra and Hathor.)

He Who Is the “Face of Heaven”

Etymologically, Heru means “that which is above.” Clearly, we’re dealing with an ancient Sky God, whose worship reaches far back into the Predynastic era. Things get interesting, though, when we look at the ancient Egyptian word for “face,” which was Her or Hra (Budge 466). Given the similarity between these words phonetically, it shouldn’t come as a surprise that the God was associated with being the “Face of Heaven,” and when you look at the very distinct markings around a hawk’s eyes, we can see the origins of the Uatchit Eyes, representing the sun (the Eye on the right)  and moon (the Eye on the left), which are the most distinctive “features” of Horus’ face.

“Eyes without a face / Got no human race”

“He of the Two-Fold Strength”

Virtually every Horus God is depicted as a hawk-headed man, although Heru-Ur has the distinction of also appearing in the form of a hawk-headed lion–a powerful image that fuses the apex predators of sky and land from ancient Egypt. Heru-Ur finds doubling of a different sort when His head is paired with that of Set’s in the same body. Individually, an epithet of both ancient Gods (the origins of Set’s worship extend into Predynastic Egypt also) is “He of the Two-Fold Strength,” so I wonder if that epithet arose as a result of this stunning iconography? According to Budge, Heru-Ur’s head represents the Face of Heaven by day and Set’s is the Face of Heaven by night (Gods of the Egyptians, 467).

Horus-Set the “Double God.” Image from the tomb of Ramesses VI.

The Four Sons of Heru-Ur

As a God whose Face encompasses the sky, Heru-Ur has bountiful “hair” or “tresses,” according to Coffin Texts of the Fifth and Sixth Dynasties, wherein His “Four Sons” have their homes. Holding massive, forked sceptres of authority in Their hands, it’s clear these Sons have important work to do in upholding the four pillars of the cosmos, i.e., “the four cardinal points of the great iron plate that formed the floor of heaven and the sky above the earth” (Budge 467). These Sons are named Hapi (depicted as a baboon-headed man), Tuamᾱutef (a jackal-headed man), Qebhśennuf (a hawk-headed man), and Imseti (totally human).

As above, so below. Seen as literal upholders of ma’at, or cosmic order, the Four Sons of Heru-Ur ensured order and stability on earth and in the Duat (Underworld) as well: Their associations with the four cardinal points and the four elements became correlated with the four main sets of vital organs the ancient Egyptians sought to preserve in the mummification process: the liver, lungs, stomach, and intestines. Hence the canopic jars that housed these organs were capped with effigies of the appropriate Son of Horus. (Furthermore, the Sons were paired with four protective goddesses in the Underworld to watch over the deceased: Hapi with Nephthys, Tuamᾱutef  with Neith, Qebhśennuf with Selket, and Imseti with Isis.) Since Osiris was the first to be mummified, He was the first to receive the protection of the Four Sons of Heru; spells in the Book of the Dead (like no. 137a) seek to transfer such protection to the deceased: 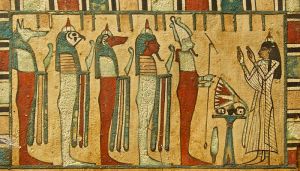 The Four Sons of Horus stand behind Osiris-Khentimentiu (Osiris the Foremost of the Westerners, i.e, Those Buried on the West Bank of the Nile). From left to right, the Four Sons are Tuamautef, Qebhsennuf, Hapi, and Imseti.  Image from the Louvre.

Contemporary Egyptologist Rosemary Clark, who also happens to be a priestess in the Fellowship of Isis, the founder of Temple Harakhte, and the author of the acclaimed esoteric works The Sacred Tradition of Ancient Egypt and The Sacred Magic of Ancient Egypt, served as my mentor in working with the Four Sons of Horus. The correspondences she taught me are as follows:

Neter Hapi! I welcome You from the South, with Your gift of life-giving water. Welcome, Son of Heru!

Neter Qebhśennuf! I welcome You from the East, Hawk Who Soars from the Horizon of Light. Welcome, Son of Heru!

Neter Tuamᾱutef! I welcome You from the North, Jackal of Desert Domain. Welcome, Son of Heru!

Neter Imseti! I welcome You from the West, Imseti, with the Breath of Life. Welcome, Son of Heru!

Anet’ hra-ten nebu maᾱt! Homage to You, Lords of Right and Truth!

My Birthday Hymn to Heru-Ur

May You wake in peace, O Purified and Exalted One!

May You wake in peace, Sovereign and All-Seeing One!

May You wake in peace, the Face That Smites with Beauty!

May You wake in peace, Golden Source of Origin!

May Your rest in the Night-bark refresh You,

May Your waking in the Day-Bark feed Your glorious Ba!

May Your Vision extend into the Double Horizon,

For You are He Who oversees the Gods,

There is no God who oversees You!

Tu a Neb-Ma’at–You are Lord of Truth,

Your Eyes are victorious,

I rejoice in Your gladness! 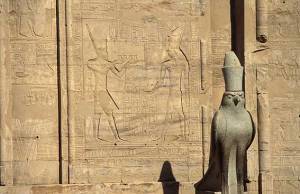 3 thoughts on “The 2nd Epagomenal Day: The Birthday of Heru-Ur (Horus the Elder)”