Our Gods Are Not Vending Machines

I was relieved to have recently been unfriended on Facebook by a woman who didn’t like my response to her questions in a post she’d tagged me in. This woman–let’s call her Rachel–announced that she was going to embark on a quest of “serious magic” to not merely land herself a lover, but a life partner “willing to put a ring on it.”

“So for the working I plan on doing,” Rachel wrote, “I’ve been doing some research on which goddess to call upon. I’ve narrowed my choices down to the following: Frigga, Freyja, Erzulie Freda, Astarte, and one Slavic goddess whose name I can’t pronounce. Anna, who should I go with? What do you think?”

As soon as I received the Facebook notification that I’d been tagged in Rachel’s post, I winced. I’ve found her to be pretty much annoying throughout the whole three years of my being acquainted with her through Chicago’s Pagan and magical communities, as at every event of mine that she attended she’d whine about not having a man in her life. She was clearly very resentful of my relationship with my Bodacious Beau, demanding to know how the Universe could be so unfair to her, giving me a partner when I wasn’t looking for one when all she’s done the past few years is search for one, but no man has ever turned up.

So now she was going to resort to “serious magic” to change her fortune. I read her post and shook my head. I could feel acid levels in my stomach begin to churn. I immediately typed out this response:

“Rachel, I am strongly against this plug-and-play magical model you’re constructing here, demanding a Holy Power that you’ve *never* cultivated a relationship with to suddenly step up to the plate and procure a husband for you. Why should that Goddess do *anything* on your behalf? It would be like bursting through a total stranger’s home kitchen and demanding he bake a key lime pie for you on the spot, even though he’s never seen you before in his life. Entitlement will not work and neither will desperation as an emotion fueling your work. You say you’re a devotee first and foremost of Yemaya. Why are you not praying to Her, for the sheer joy of connecting to Her, giving Her thanks and praise, and then you can trust Her to open your ways for you so that the right partner will come to you at the right time and through the right life circumstances? Why don’t you try that approach?”

Another woman, reading the post and my response to it, chimed in below my response and echoed it, wondering why Rachel wasn’t just praying to Yemaya first. And Goddesses are not Things to be used, she cautioned.

No, They’re not. They’re not Cosmic Vending Machines in which you energetically deposit X as an offering and expect Y to happen as a result. Especially when you’ve never bothered to establish a relationship with that Deity at all. I could just imagine, as I think about wanting to sell my condo so my Bodacious Beau and I can move into a bigger space, approaching a Deity I have zero connection or rapport with, and asking that Power to help me sell my home and get me a new one.

“Hey, Herne! Herne the Hunter! It’s Anna here. Yo, I’m a priestess! Since You’re a Hunter, go hunt down my next home for me, why don’t You? Here’s some ribeye steak!”

Could you imagine? Herne, to play along with this silly scenario, by rights ought to turn around and say, “Who the fuck are you, puny human?”

Am I the only person who believes in piety? And that the foundation of communion with a Deity ought to be based in love and service?

Those might be alien concepts to many whose spiritual practices fall under a Western Pagan umbrella these days, but they’re the cornerstones of worship in Hinduism, for example. Bhakti yoga is the path of love and service to a God or Goddess. By performing the devotional ritual known as a puja, the devotee supplies the Holy Power His or Her favorite offerings–from foods to types of incense and even musical instruments–chants mantras to anchor one’s focus solely on the Deity and Her or His attributes, and does it all because joyful service to a Holy Power is its own reward.

I was very happy that for our public Beltane observance this past Sunday, May 1, the Chicago Fellowship of Isis Lyceum that I led (in our Archpriestess’s absence) did a devotional ritual to the Great Hindu Goddess Maha-Devi (that’s more of a title than a name, as “Maha-Devi” literally translates to “Great Goddess”!), as She is the Deity honored in the ritual we had voted on to perform: Olivia Robertson’s “Wesak” ritual from the Panthea FOI clergy booklet of the 1970s. Our Lyceum’s chief priest, my friend Vincent, and I decided to host an entire afternoon of workshops and activities leading up to the Wesak ritual itself. I knew I wanted to create an authentic puja for everyone to participate in. (In terms of Hindu Deities, Ganesha and Kali-Ma have always been venerated to a high degree in my home.) Daniel (my Bodacious Beau) and I decided to spend the day before Beltane traipsing around Chicago’s “Little India” neighborhood, procuring puja supplies. We went to two of my favorite mom-and-pop shops, Patel Brothers and India Bookhouse. Both sell wonderful supplies, and when I saw in India Bookhouse this gorgeous hand-painted statue of Maha-Devi in Her incarnation as Durga, I knew that it would be coming home with us regardless of what the price tag announced.

Excitement was really building at the thought of having a public puja–a real first for our Chicago-based FOI Lyceum of Alexandria. Daniel and I arrived at the FOI’s new, permanent urban temple home (that news deserves its own blog post!) that night and began to clean up and set up the elaborate Maha-Devi altar on the floor. It took us hours to do, and again, it was done in a spirit of joyful service throughout.

“She’s already here,” my love declared. I stopped just shy of filling the shrine bowls with their offerings because that serves as part of the evocation of the Deity being honored, so that would be done just before the puja proper commenced. “That statue is so alive and I can totally feel Durga blossoming with happiness at what we’re going to do here tomorrow,” he said.

I agreed. She was totally present and aware. She was liking the new space too. This would be an auspicious debut ritual in our new temple location. Everything was harmonizing gloriously.

The weather was cold and rainy all day on Sunday, and about 15 people showed up. I was surprised that one of the guests was an old friend from the Garderian Wiccan days we shared, back at the start of the millennium–she moved to Oregon more than four years ago, and this was my first time seeing her since. She saw the Facebook marketing campaign for the rite and wanted to surprise me. Well! I thought. Retrograde Planets can be good for something! It’s a delight when people from the past whom you love and miss can magically be brought back into your surroundings, especially when you’re going to share Sacred Space together. My globetrotting witch friend Kate was a joy to have in the Beltane festivities, and given how much time she’d spent living in Bali years earlier, she was more than familiar with Hindu puja and was a great companion to have in literally singing Maha-Devi’s glory that afternoon and evening.

I distributed index cards with a powerful Sanskrit mantra to Maha-Devi as Durga. I practiced the simple melody alone a few rounds and then we sang in call-and-response format so everyone could learn the Sanskrit better. This was the chant we did, and I did use a 108-bead mala to keep count.

It was so amazing, when the puja did get underway, to look around the room and see so many people caught up in the joy and love of bhakti yoga, of showing devotion to a Goddess with nothing being asked for in return. People’s faces looked positively enraptured. Eyes were closed. Hands were folded in prayer for some; others had their arms stretched over their heads as they sang. The room we were in positively shimmered with vibrant Power. You could absolutely feel it.

That puja has left me feeling energized all week, coasting into today’s vibrant and auspicious Taurus New Moon featuring a Grand Trine in Earth Signs (the Sun, Moon, Venus, and Mercury in Taurus are trining Jupiter in Virgo and Pluto in Capricorn). What an excellent time to be honoring Maha-Devi, grounding ourselves in the joys of being alive in this world and giving thanks and praise to the Holy Powers that bestow so many blessings on us every moment of every day, blessings we normally take for granted. The purpose of puja is to express your thanks for those blessings; that’s what devotion is for. My hope is that more Western Pagans understand what Polytheists the world over have known and continue to know: Loving our Gods is its own reward; we don’t need to be continually asking for “things.” 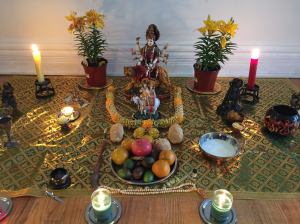 52 thoughts on “Our Gods Are Not Vending Machines”