How Death Crashes Our Assumptive Worlds: A Dispatch from the Frontlines of Grief and Spiritual Crisis

Very sad and shocking news was relayed to me as I was about to get ready to shower and start my morning: my dear friend Kathryn, on whose behalf a multi-state healing prayer circle kicked off last weekend in preparation for her grueling cardiac surgery yesterday, died late last night. Apparently, the full moon eclipse energies ushered her out of this world and into the crystalline Otherworld of Caer Arianrhod, where Kathryn can journey to her ancestors and to her Brythonic Polytheist family of the Children of Don.

I am still reeling. Especially because news from her husband Arthur conveyed that Kathryn underwent the first, main leg of her cardiac surgery quite well; the blood clot had been successfully removed. Before going to bed last night, I approached my Sekhmet shrine, where I had been doing healing rituals on Kathryn’s behalf (as well as asking for support for Arthur), and prayed a long, heartfelt prayer of gratitude. I felt a sense of peace and knew I was going to rest well. I truly expected that I would be waking up to joyous news today, that Arthur would be reporting that Kathryn is fully awake and responsive to her family around her and that she might even be quoting passages from The Canterbury Tales in a spirit of good humor (Kathryn taught Medieval British Lit. at the high school level).

Not this, not news of her death.

I cried as I showered and got dressed, staring out my west-facing bedroom windows at 6:30 a.m. at the bulbous Leo Full Supermoon, which was fully in view and stupendously bright. A sliver of cloud covered the top of the moon, giving it an angle not unlike a menacing eye, the death-dealing gaze of the Medusa. I thought in a rapid-fire sequence of images: of a sickle coming to harvest Kathryn’s life, of the Goddess Rhiannon, to Whom Kathryn was also devoted, spiriting Kathryn away in Her form as the White Mare, the original etymological source of our English word “nightmare.” Rhiannon absconded with Kathryn under a moonlit sky to a desolate seashore. I cannot get this imagery out of my mind, even though I’ve been at my office for hours, presumably working at my desk. The winter-frozen beauty and horror of the moon from a few hours ago is also indelibly imprinted onto my consciousness; this is the best image that approximates what Soulscape I’m traversing in my shock and grief: 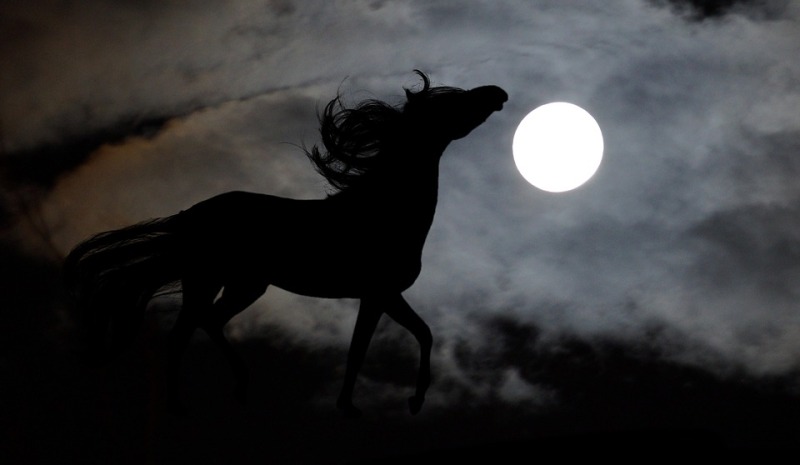 I met Kathryn and Arthur through my connections to Circle Sanctuary and my experiences at Pagan Spirit Gathering and the Green Spirit Festival. They shared a tremendous, rare, pulsating love that was very palpable to everyone who saw them; aside from their shared Brythonic cultus they also shared a Bardic spirit, with Arthur being an accomplished Celtic folk singer and priest and Kathryn a skilled poet and priestess. Kathryn was such a small but mighty presence; when we’d meet on festival grounds, she’d giggle in advance about my penchant for hoisting her into the air, which I invariably did. She radiated such joy, compassion for the world, uncompromising feminist principles, and a dedication to creativity and critical inquiry in a jaded, mediocre world that is dangerously in short supply of both endeavors. Her students have lost a true lamp of the Humanities, and my heart grieves for them also.

The most wonderfully loving couple you could have ever hoped to have shared Sacred Space with.

The last time I saw Kathryn in person was the Green Spirit Festival at Circle Sanctuary in August of 2015. She and Arthur were teaching workshops on Welsh Deities and they led the main ritual that year, in which the Goddess Rhiannon was the Chief Deity honored.

I thought back to when I was 18 years old and preparing to “come out of the broom closet” to my parents. I had a bizarre dream/unbidden shamanic journey/vision of stepping into a long, black limousine, in the back of which were Beings that I now recognize as the Three Fates, eldritch and mysterious women, all in white but decayed, with shrouds veiling Their faces. The driver of the limousine adjusted the rear-view mirror so that I could gaze into it. I saw the moon, in rapid time-lapse photography, morph from a slender New Moon crescent to a bulbous Full Moon. The white heat of the light filled first the mirror and then the entire limousine with a blinding brilliance. I was no longer “me,” I was no longer anchored to anything. All was blinding white light. And then I heard a distinct shout from a female voice: “RHIANNON!”

Over my right shoulder appeared the Goddess, the snout of a white mare turning into the profile of a gorgeous woman with pale blonde hair and gleaming turquoise eyes. I had the sensation of flying forward with Her until I fell back into my body. When I awoke from that dream/vision/soul journey, I knew I had to tell my parents that I am a Witch and I’m severing ties with the Eastern Orthodox Church of my upbringing. I knew that what I had to say would disappoint them, so I girded myself accordingly. I have never thought of the Goddess Rhiannon until Kathryn and Arthur’s Green Spirit Festival 2015 ritual, which was a lovely and deeply moving devotional ritual to Rhiannon. And now I’m thinking of Her again as of this morning.

I acknowledge in the state of shock that I’m in and in the early stages of my grief that I’m in a liminal state of consciousness. As an astrologer, the cautionary advice I’ve given to other people about today’s eclipse energies–be mindful of the Neptunian current (the Leo Moon is inconjunct Neptune in Pisces, while the Aquarius Sun sextiles it) and ride it out as best as you can; don’t make any serious decisions today–is stuff I need to heed myself. The eclipse energies also summoned my menstrual period a full four days early, more purging to be had, and in my discomfort I’d like nothing more than to go home and curl up with a hot water bottle. But as this is a grinding capitalist world, whose Protestant-informed work ethic forces people to deny their humanity before the demands of productivity, I know I’ll just have to resort to popping some acetaminophen or aspirin, whatever the communal employee medicine cabinet here offers.

I know I’m in a strange space and that my unease goes beyond my physical discomfort or the processing of the shock that Kathryn did not, despite being in stable condition last night, survive the second phase of her cardiac surgery. What’s bothering me is that my assumptive notions have come crashing down.

As noted grief expert Dr. David Kessler, whose teachings for people in bereavement I cannot recommend highly enough, has said, deaths and death-like losses (of a relationship, of a job, etc.) that we experience bring calamity because our assumptive world gets shattered. We assume that our loved ones will always be with us, that no parent should ever have to bury a child, that saying “I Do” to a partner means “forever,” and so on, but the reality of our lived experiences teaches us otherwise about such assumptions.

I’ll admit it: My assumptive world about the power of prayer has come crashing down in the wake of Kathryn’s death.

With hundreds of people from a variety of spiritual backgrounds–Polytheist, Wiccan, even Christian–praying for Kathryn to have a successful surgery outcome, why were those prayers not fulfilled? Prayers to a whole Host of Deities–for me, as you already know, prayers were directed toward Sekhmet the Healer, She Whose Mighty Name Causes All Fiends to Tremble, Sekhmet the Guide of Surgeons’ Hands. Even my mother, who is physically ill herself and who has never met either Kathryn nor Arthur and only knew of them through my anecdotes of Circle Sanctuary festival experiences, has been praying her little heart out since the weekend and lighting candles for Kathryn at a Serbian Orthodox monastery. A chorus of prayerful voices…and I’m left wondering in all seriousness why those prayers were not answered. It’s a thorny theological issue that has no clear-cut answers, I know, just a lot of heavy feelings for me in my chest, the locus point of the shattering of my assumptive world. When speaking to my mother on the phone before I boarded my subway train this morning, I told her that this death might produce a crisis of faith for me. She said she can’t understand losing faith, but she can understand losing hope.

I was initially planning on doing my solitary Imbolc ritual when I get home from work tonight but now, frankly, I don’t feel like it. Really, I feel like telling Brigid to buzz off; I feel like wholly dismantling the elaborate altar that I’ve already set up. I’m sure this is my depression talking, exacerbated by physical discomfort from my menstrual period, so I’ll try not to act on any of my impulses. Like my own astrological advice to others about today stated, just ride out those Neptunian vibes without making any major decisions.

And still, the vision of the White Mare and the Moon continues to gnaw away at my heart. Oh, the hurt of it.

Those who are remembered, live. May you journey well to your ancestors, sweet Kathryn. The world is going to be less bright, less vibrant, less educated with you gone.

Who you were in this world was a direct extension of your pure love and the gifts that you shared with humanity, with your literature students and with the broader Pagan community. Both communities are considerably bleaker now.

My heart absolutely breaks for your stalwart husband Arthur, as I have never with my own eyes seen the genuine love a man has had for his wife the way that Arthur loved you, still loves you. May you still share your Bardic gifts with each other; you were and will always be his Muse.

May Aset and Nebet-Het enfold Arthur within Their wings, comforting him in his devastating loss of you. May Anpu lead you through the darkness towards the gleaming Scales, where your ab (heart), restored to its perfect wholeness, finds absolute balance in ma’at and beauty. May you shine amongst the imperishable stars.

Until we meet again, my friend.

7 thoughts on “How Death Crashes Our Assumptive Worlds: A Dispatch from the Frontlines of Grief and Spiritual Crisis”