The Crossroads of Art and Spirit, The Fellowship of Isis in Chicago

TENDING TO THE ANCESTORS: A CALL FOR SUBMISSIONS FOR THE WINTER 2018-2019 ISSUE OF ISIS-SESHAT JOURNAL

Seeking Submissions for the 2018-2019 Winter Issue of Isis-Seshat Journal on the Theme of “Tending to the Ancestors, Propitiating the Dead”—Deadline: Friday, January 18, 2019

“Iba se Eggun.”
(“I pay homage to the spirits of the ancestors.”) — Start of a Yoruba prayer recited in Ifá at the outset of certain rituals

I paid a visit to my Oluwo (Godfather in Ifá) last night and we had a chance to catch up on the whirlwind of life events I’ve been experiencing since my father’s cancer diagnosis two months ago. We consulted Ifá, and the voices of my own Orí (Destiny/True Will) and my Eggun (Ancestors) resonated strongly in the oracle’s spiritual prescriptions. The restless spirits of the dead, teeming hordes of the Eggun Buruku, were also vying for my attention, a fact confirmed by my lived experience of increased spirit activity at both my home and my parents’ house, where I recently (and totally by happenstance, and during a thunderstorm, no less!) made contact with the spirits of a young woman and children that had drowned in the river marking the northernmost boundary of my parents’ property. By their clothing, they appeared to have lived during the mid-nineteenth century. The children (blond-haired fraternal twins aged about seven or eight years old), unrelated to the young woman, were lost and crying out for their parents. The sight of them made my heart ache. But I couldn’t focus on them as I quickly realized the other spirit posed actual danger.

The spirit of the young woman, a gaunt brunette with sallow cheeks, was filled with anger and envy towards the living. She spied me right away and knew that I could both visually see her as well as sense her malice. I immediately sprang to shield the house, as she was striding up the backyard towards the north-facing master bedroom window. I quickly set a white ceramic plate with food, grabbing what I could find in the kitchen from my mother’s dinner leftovers (dad is forbidden to eat solid food) —cuts of roasted pork, a dollop of Serbian sataraš (a goulash-like dish with roasted red pepper as one of the main ingredients), a handful of red grapes, and two slices of Greek bread with sesame seeds. A massive yew bush grows in the yard beneath the master bedroom’s north-facing window, and I placed the plate amongst its tangled roots. I ran back in the house, slammed the door, grabbed the bottle of Holy Water that perpetually sits on my parents’ Ancestor altar for our family dead (where my brother has place of honor), and ran into the master bedroom, screaming to my mother as I darted down the main hallway that an evil spirit was approaching. (She reacted by gasping and making the Sign of the Cross, then yelled at me to not interact with the spirit. My father, if you’re curious, was in the family room downstairs, sound asleep in his rocker-recliner chair. He never stirred.)

The violent thunderstorm dramatically added to the unfurling drama, and it was just as a white-light explosion of lightning lit up the bedroom that I saw the female spirit’s vile face grimacing on the outside of the window. I unscrewed the bottle top of the Holy Water, flinging and splashing about 1/3 of its contents directly onto the windowpane, while commanding the spirit to depart, declaring that she had no one’s permission to enter this house or to harm the living within its walls in any way. Instead, she could partake of the food set out for her before returning to her watery grave. As I shouted “BEGONE!” for the fourth time, my Hand of Ifá bracelet, one of my sources of spiritual defense marking me as a higher-level initiate in The Religion (so we call it), instantly broke on my left wrist and I heard the sound of its beads bouncing and scattering onto the carpet.

That’s when I screamed in terror. 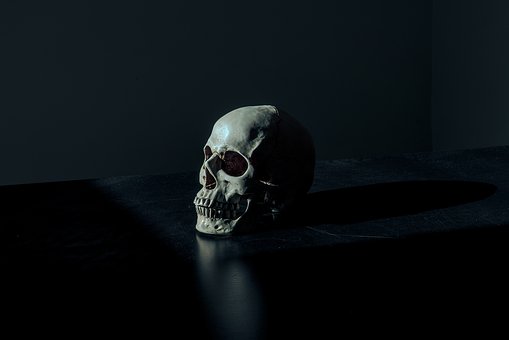 Ancestor veneration and rituals to simultaneously propitiate and ward against the restless dead are among humanity’s oldest and most globally recognized forms of religious expression. Whether I’m looking through the framework of my own ethnic Serbian culture, where we literally feed our beloved dead at their graves several times a year during Days of the Dead known as Zadušnice (they always fall on a Saturday) and where every Serbian family daily tends to its Ancestor altar (which must always be placed facing east in the house); or whether I’m looking at the practices of the ancient Romans, who had calendar days devoted to warding against the Lemures/Larvae, the restless, harmful dead; or to contemporary Chinese culture, where the Ancestors’ graves are swept clean and laden with bountiful feasts every spring during the Qing Ming festival; or to Mexico’s vibrant Dia de Los Muertos, where the living joyfully bedeck themselves as colorful calaveras and also picnic with the dead; or to the Yoruba people of Nigeria and their extensive roster of ceremonies for appeasing both the Ancestral/known dead and the communal, unknown dead—rituals which survive unchanged in Ifá despite the ideological incursions of fundamentalist Christianity and Islam—it’s clear that the recognition that the dead have an interdependent relationship with the living is a deeply held, worldwide belief.

All of these ideas came rushing to me when I left my Oluwo’s house last night. As I walked to my car with his wife, Chiki, a powerful Iyalorisha consecrated to the orisha Oyá, Guardian of the Cemetery Gates, I noted that the wind gusts had picked up considerably. The temperatures had dropped a whopping 30 degrees from the day before, which I had actually spent suntanning on one of my favorite Chicago beaches!

“You would say that, wouldn’t you, Mother Oyá?” I chuckled.

“Get home safe and sleep well, Ana. May your Eggun watch over you and may your Orí always keep you on Wisdom’s road.”

The Call for Submissions

All of my fellow Polytheist friends, hailing from a variety of traditions such as Hellenismos and Heathenry, and many Pagans that I know as dear friends or through networking events both near and far, actively practice Ancestor devotionals. At least a couple of my friends are published authors who have even written books on the subject! Greater still are the growing numbers of newcomers I encounter who are looking to get started with Ancestor work, but they don’t know where to begin or they have complicated situations (e.g., they’re adopted and have an uneasy relationship with their birth families, or deceased relatives of ill repute in their blood families are not individuals they care to honor). It’s for these folks that I’d like to create this Winter 2018-2019 issue of Isis-Seshat journal on the theme of “Tending to the Ancestors, Propitiating the Dead.”

For new blog readers who don’t already know this, Isis-Seshat is a quarterly journal of the worldwide Fellowship of Isis (FOI) and I serve as its Executive Editor, an office charged to me by my late Archpriestess-Hierophant, the Rt. Rev. Deena Butta, as she lay dying in December 2012. Isis-Seshat is open to contributions from all theistic Pagans, Polytheists, magicians, shamans, spirit-workers, and related practitioners besides FOI members (clergy and laity). You do not need to be a devotee of the Kemetic (Egyptian) Gods to contribute content, either.

Content suggestions may include, but certainly aren’t limited to, the following:

So those are some ideas that merit exploring in this upcoming issue of Isis-Seshat. However, I will also gladly accept any of the following:

Again, those are just some suggestions to get those fingers flying!

Please ensure that all submissions adhere to the following guidelines:

The deadline is Friday, January 18, 2019, and the anticipated release date is Friday, February 1, 2019 (Imbolc in the Northern Hemisphere).

I sadly am not in the position to financially compensate Isis-Seshat contributors, but you will receive a complimentary copy of the magazine (ideally print, if I can afford the costs).

For questions or submissions, email me at jackalmoondesigns@gmail.com.

I look forward to hearing from you! Blessings in the Name of Isis-Seshat, Recorder of Deeds and Weaver of Legacies! May She always render you True of Voice!

4 thoughts on “TENDING TO THE ANCESTORS: A CALL FOR SUBMISSIONS FOR THE WINTER 2018-2019 ISSUE OF ISIS-SESHAT JOURNAL”