Check Out My New Jewelry Listings on JackalMoonDesigns!

I was ridiculously productive in the sweltering Chicago heat yesterday, making no less than 14 gemstone beaded necklaces in the span of an 8-hour workday; 12 necklaces have since been listed for sale on my Etsy site, JackalMoonDesigns. From devotional pieces intended to honor Deities across a swath of pantheons (Celtic, Kemetic, Hellenic) to my new and expanding line of Spirit Animals to more standard occult fare, there’s truly something for everyone in this diverse lot!

I made devotional necklaces to Herakles (the sterling silver pendant from Greece is neat because it’s two-sided: the Nemean Lion is on the reverse!), the Dagda (He’s depicted triple-faced in the sterling silver pendant), Sekhmet, and the Haitian Vodoun Lwa Simbi. Herakles connoted celestial energies to me so I chose lovely larimar and amber stones, the hues of a cloudless summer sky. The Dagda has earthy moss agate nuggets and Sekhmet fiery carnelian with protective tiger’s eye. Simbi, a class of water spirits in Vodoun, is given blue apatite stones and Job’s Tears herbs that I harvested myself from a sacred valley in Hawaii when I lived there. Job’s Tears are said to impart spiritual protection to the wearer. 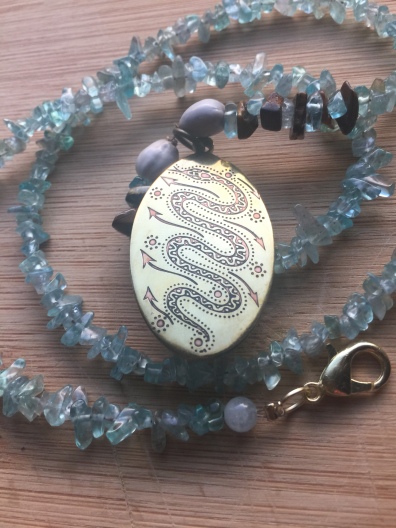 Honoring Animal Spirits of the Land

It only occurred to me after I’d made their respective necklaces that the Animal Spirits that asked for energetic expression in this tangible form happen to be land-based ones: Rabbit, Stag, and Wolf. Rabbit features a Tibetan pewter pendant that is wonderfully detailed and two-sided, so the wearer can choose to have the animal point left or right. I kept that necklace simple with smooth and nurturing African turquoise beads. Stag is solidly earthy: the pendant is hand-painted ceramic and the beads are a mix of two types of jasper, carved soapstone, tiger’s eye, and deer antler rondelles. Wolf features a sterling silver pendant that is nicely detailed on the sides. His energy struck me as more Arctic, so I chose gemstones with cooler tones such as labradorite, snowflake obsidian, and tree moss agate. 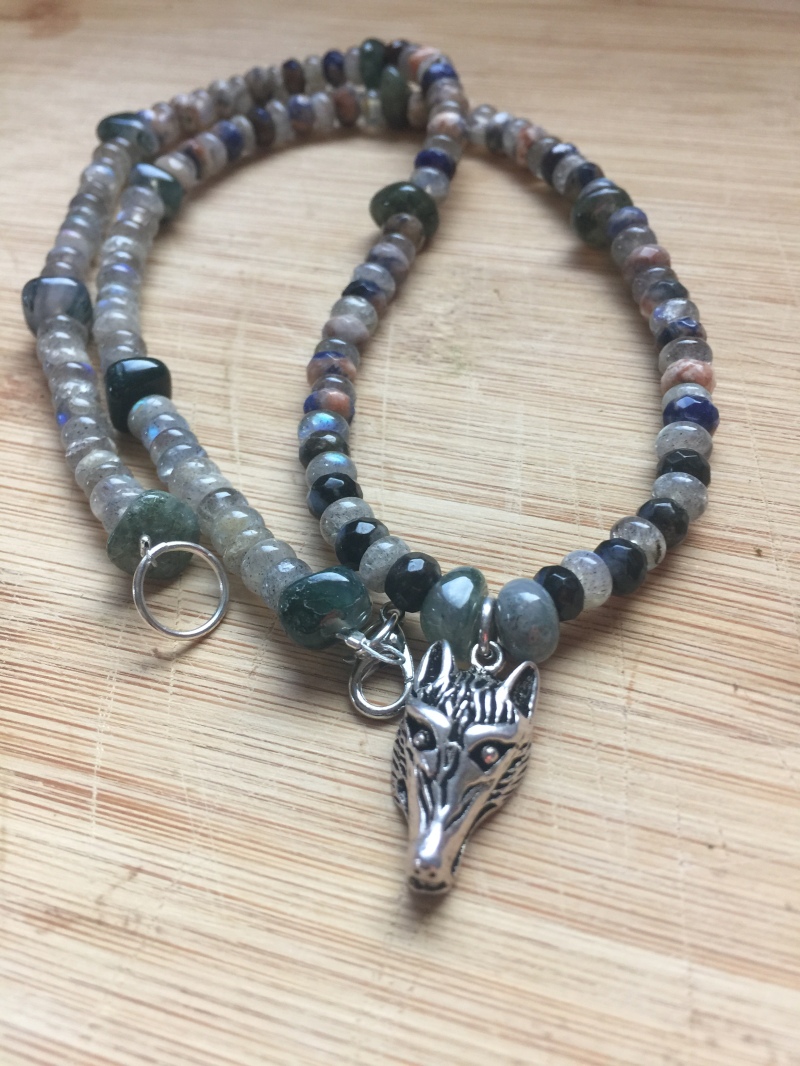 I found some extraordinary sterling silver pentacle pendants and they lent themselves perfectly to my stock of high-grade gemstone beads. The first is a rose-quartz pentacle that features the sterling silver star on a backing of a sheath of rose quartz. This bold pendant is framed in a lush cascade of rose quartz, blue chalcedony, and silver accent beads. The overall effect is healing and calming; it is my intent energetically to have that piece serve as a healing instrument to someone suffering from severe heart chakra issues: grief, heartache over the breakup of a relationship, low self-esteem issues, etc. 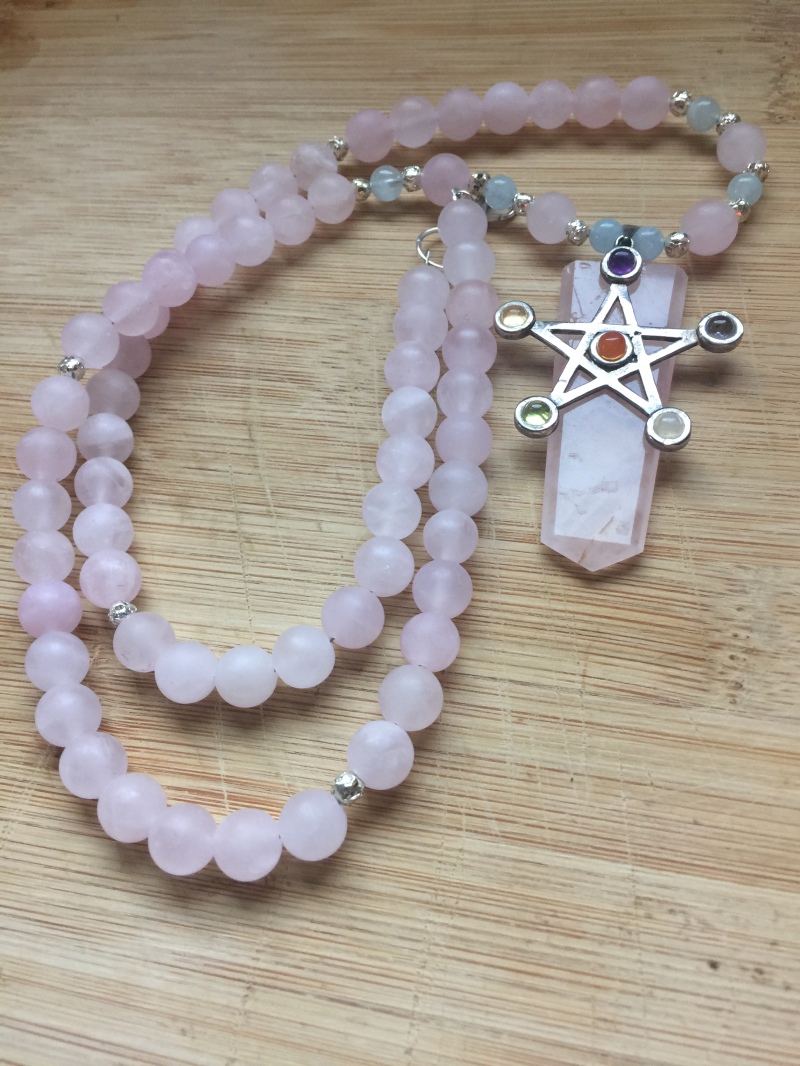 The second pentacle pendant features a lovely Triple Moon. I went whole hog with my highest grade rainbow moonstone beads; labradorite and 15 mm larimar accent the piece as well. I think this would make an excellent ritual jewelry item for a Wiccan or other lunar-affiliated magical worker, or even a devotee of the Moon Goddess, Selene.

It’s extremely rare for me to come across a seven-pointed star in pendant form. I think this necklace, set in simple but elegant lapis lazuli and malachite, two historically appropriate stones hailing from the ancient Near East/Fertile Crescent, would be ideal for a Canaanite Polytheist, especially one who is a devotee of the ancient Goddesses hailed as “Queen of Heaven” such as Inanna or Ishtar. But I know a lot of occultists who would dig it as well! It’s a very lightweight piece and perfect for everyday wear.

And Now for Something Completely Different…

This unique sterling silver pendant hails from Egypt and condenses, in hieroglyphics, a love spell meant to attract a new lover to the wearer. I certainly can only legally say I am selling this as a curiosity only and can not/will not guarantee the success of its intended purpose, but I’m sure someone out there would leap at the chance to consecrate this necklace in their tradition and use it as part of a love working. It felt appropriate to use rose quartz and malachite gemstone beads for this one, aligned as those stones’ colors are with the heart chakra and with many Goddesses of Love.

I remember being a child in the year 1988 and watching this outrageously awful episode of the Geraldo show, which was meant to whip up the audience into the most paranoid frenzy possible about their fears concerning a vast, Satanic conspiracy preying upon America’s youth. Heavy metal music was a big scapegoat at the time, and poor Ozzy Osbourne couldn’t get a word in edgewise from the condescending Geraldo. Michael Aquino, then-leader of the Temple of Set while serving his country as a Colonel in the U.S. Army, struck me as being beyond admirable for the poise, rationality, and calm he exuded while enduring Geraldo’s inane interrogation about the ritual murder of children, blah blah blah, while the sheeple in the crowd trembled. It truly was one of the lowest levels I can remember popular culture sinking to in my lifetime.

My musical tastes at the time (which was almost always centered on British bands) vacillated between punk and New Wave and metal, with Venom being one of my favorite bands. When I came across this sterling silver pendant with the visage of the “Devil” in goat form leering from the confines of his inverted pentagram, all of my childhood favorite songs by Venom came rushing back into my head (e.g., “1,000 Days of Sodom,” “The Seven Gates of Hell,” “Countess Bathory,” “Manitou”) and I knew I had to make a gemstone homage to that 80s “Satanic Panic” toute suite!

So here he is, in all his Baphomet/Sabbatic Goat God glory, extolling the left-hand path and encouraging the wearer to continue to thrive in socially aberrant, antinomian currents. Are you bold enough to wear this piece? Dodecahedron smoky quartz beads and bloody carnelian evoke the smoke and the fires of Hell, respectively, while deer antler beads (alas, I have no goat bone ones small enough for jewelry-making!) bring that Horned Lord element. Ave, Satanas! 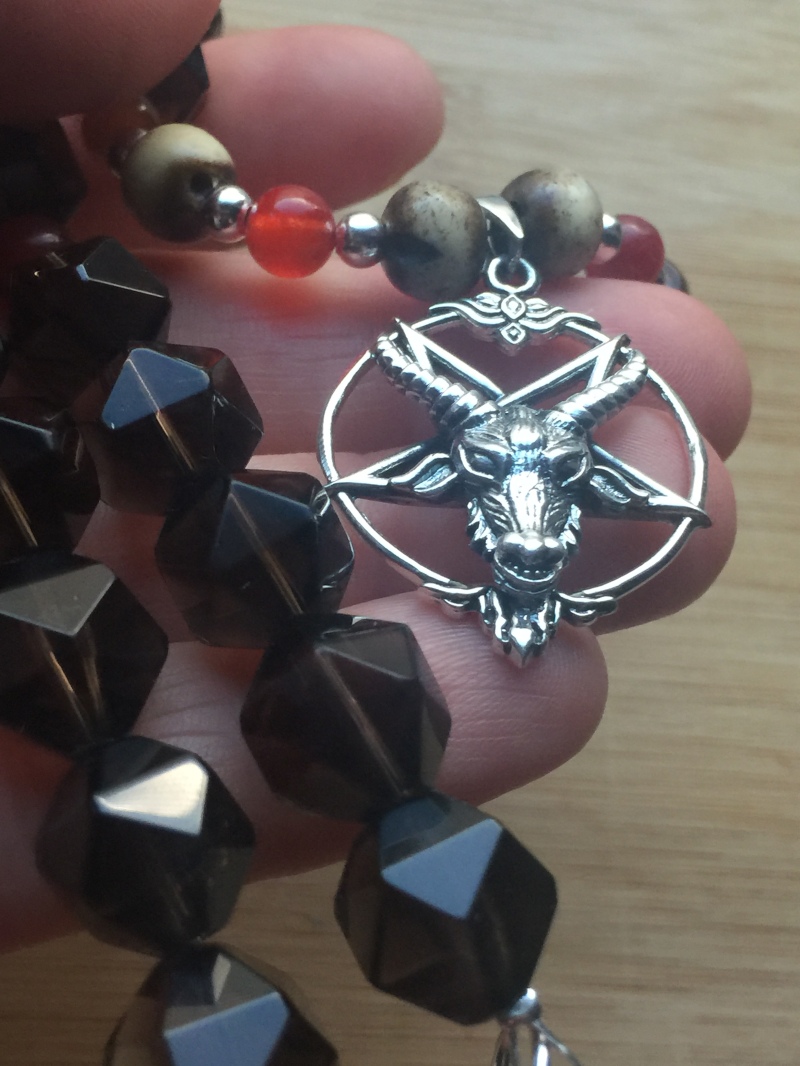 Look at him leering! I LOVE IT!

All of these and many other listings are active on JackalMoonDesigns. If there’s a piece you’d like me to custom create for you with your choice of pendant and gemstones, I’d be happy to do so! Feel free to reach out to me at jackalmoondesigns@gmail.com.