My Year-Wheel Tarot Reading for 2020

Happy New Year and may this new decade bring vibrant health, joy, prosperity, and love to us all! Per my time-honored tradition, before commencing my revels last night I sat in silent contemplation, reviewing my notes on the yearly forecast Tarot reading I did for 2019 to gauge my accuracy and then doing my reading for myself for this year.

I cracked the east-facing windows open a bit to bring in new energy. As I sat on the floor and faced east, I shuffled my Ethereal Visions Illuminated Tarot deck (published by U.S. Games Systems; it’s rapidly becoming my favorite deck) and chanted the following to the goddess Hekate Phosphoros, the “Light-Bringer”:

My gorgeous hand-sculpted Hekate statue was made by Chicago’s own Jeff Cullen of TheVodouStore.com.

Hidden Hekate, to me show

what it is that I must know!

The baleful past I now let go:

In love and wisdom, I do grow.

Visit me this night with divination and the sight!

I let my gaze unfocus and I emptied my thoughts as I shuffled the cards. The cards in this deck are somewhat large for my small hands, so the shuffling process felt a little cumbersome. I asked which card was to be my Significator and then this fell out of the deck and onto the floor: The Queen of Pentacles, one of my favorite Minor Arcana cards! 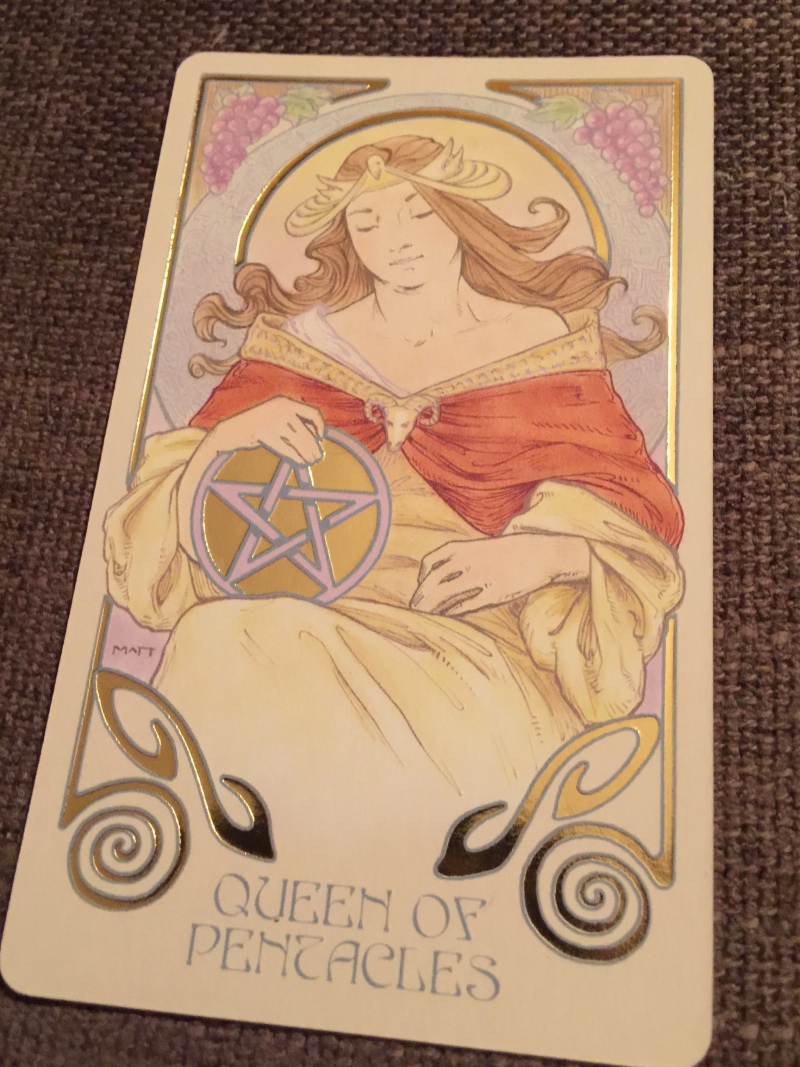 The sort of retro/1970s’ interpretation of Art Nouveau aesthetic and gilded accents are two of the reasons why Ethereal Visions appeals to me strongly as a Tarot deck.

I shuffled for another minute or two afterwards and then fanned the cards out from left to right. I placed the Significator card in the center of what would be my standard Zodiac Wheel/Months of the Year spread comprised of 12 cards in a circle. Card 1, January 2020 or the 1st House, is arranged in what would be the “9:00” position of the imaginary clock face. The subsequent cards get placed and read going counterclockwise as that’s how the 12 Houses in a horoscope progress; the final card, representing the 12th House and the month of December 2020, falls in the “10:00” position.

Here’s what I drew: 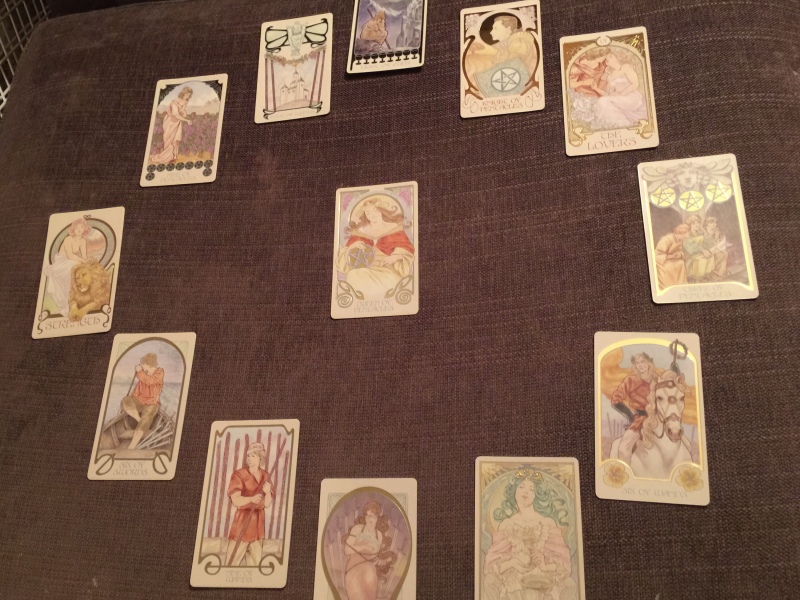 1st House/Month of January: The Strength card. How auspicious to start the new year/new decade with this highly auspicious Major Arcana card! The 1st House is the House of the Self, so I’m coming into 2020 from an unshakable foundation of integrity, courage, and self-discipline. This card also denotes victory over evil: my resolve will pay off.

2nd House/Month of February: 6 of Swords. Thankfully, in this spread I only drew two cards from the Suit of Swords, and this was the first. The 6 of Swords represents leaving behind a bad space for something better. Since the 2nd House in one’s natal chart represents Earned Income/Resources, this speaks very well to my financial prospects for 2020!

3rd House/Month of March: 9 of Wands. I wound up having a total of three cards from the Suit of Wands, and this is the first. The figure in this card looks battle-weary but poised, ready to handle whatever is thrown at him next. This card can signify preparedness but also a delay in accomplishing goals. It can also mean recovery from illness. As the 3rd House of the Zodiac has to do with communications and travel, it can mean I have to be guarded in what I say as well as exercise a higher degree of personal caution than normal when traveling this year. Some degree of suspicion of others’ motives will cross my mind and that’s actually a healthy response, otherwise I run the risk of being deceived by others (their communication).

4th House/Month of April: 8 of Swords. My second Swords card is the only real negative one of this spread. I may receive bad news or undergo a crisis related to Home and Family this month (remember, my father is still bravely fighting cancer), as the 4th House governs those areas of life. The message of this card can also be interpreted as an extension of the previous card regarding caution in communication: read the fine print in all legal documentation, Ana! I hope that this news won’t be as bad as I fear it might.

5th House/Month of May: Queen of Cups. This is the first of two cards I drew from the Suit of Cups. I absolutely love this card; in fact, I served as the model for the Queen of Cups in a friend’s Chicago-area photography-based Tarot deck she self-published back in 2005! The Queen of Cups is a very artistic, psychic, and compassionate woman. Since the 5th House rules Creativity and Hobbies (in addition to Romance), I sense I will be having a spike in my artistic creativity in May, probably creating new merchandise to sell on my Pagan Etsy site. If this Queen turns out to be a person external to me instead, she will more than likely be a Water Sun Sign woman (Cancer, Scorpio, Pisces) who will bring me good luck/economic opportunities through the arts. She could also be an energetic healer who comes to me through my vast networks in the national Pagan community.

6th House/Month of June: 6 of Wands. My second Wands card brings me another valuable message of victory after a struggle. The 6th House governs day-to-day work/your job as well as your physical health, so the message of victory could be a much more prosperous job in a better environment/at a better company for me or a change in my health for the better or both. The 6 of Wands can also denote the successful completion of a work project, especially something that was done in a group. It’s time to reap the rewards! Huzzah!

7th House/Month of July: 3 of Pentacles. My second of materially auspicious Pentacles cards, the 3 of Pentacles, which is here showing up in the 7th House of Marriage/Partnerships, tells me that the foundation is going to be laid in July for something or someone who will be very important to me. A secure romantic relationship, money, prestige; gaining other peoples’ approval and support for the expansion of my business brand: these are all distinct possibilities. No matter what, me gusta! Let’s see what develops in the heat of the upcoming summer!

8th House/Month of August: The Lovers. Well, well, isn’t this a delightful development? My second Major Arcana card in my spread could signal the evolution/creating a more “official” commitment of the relationship with a romantic partner that comes to me in July. The 8th House has to do with Sex, Death, and Other Peoples’ Money, so fireworks in the bedroom are a distinct possibility here, since The Lovers can also indicate hot sex in a Tarot reading. The Lovers can also indicate needing to make an important decision as a choice could be offered to me, and the stakes could have to do with love or business (the 8th House, again, focusing on issues like passive income/insurance payouts/inheritances, not just transformative sexual experiences and heightened emotional intimacy). August sounds like it will be interesting!

9th House/Month of September: Knight of Pentacles. I’m very happy to see that my Virgo birthday month is represented by the Virgo card par excellence of the Tarot, the Knight of Pentacles! This is a very auspicious card, and can indicate either a reliable, emotionally mature, kind and generous, trustworthy partner (in love or business), or the phenomenon of steady financial/income growth, assured manifestation of material desires. The 9th House in a horoscope is the House of Expanded Horizons: expanding your consciousness through long-distance travel and contact with other cultures, as well as through higher learning and the higher intellectual pursuits of religion and philosophy. My gut is telling me this card is representing an actual person, and the lover who may be a huge part of my life starting in the summer of 2020 will more than likely be an Earth Sun Sign person (Taurus, Virgo, Capricorn). This lover and I could be taking a fun, long vacation together in a place far, far away. I haven’t had a real vacation in I don’t know how many years, so, Bring it on, sayeth I! If this card turns out to represent money matters instead, the message is my finances will be expanded considerably. Either way, this is awesome and I can’t wait for this energy to manifest!

10th House/Month of October: 8 of Cups. My second of two cards from the Suit of Cups shows me turning my back on something I previously valued in order to pursue something better. Since the 10th House rules Career and Worldly Status, this looks like me switching jobs or even careers (did you know the average American changes careers four to six times in the span of her working years?) to move into a far better role with a better salary in a better/more compatible environment for me. This is a lunar-inspired energy, as the figure in the card is making a journey by the light of the full moon, so whatever decision I make will be one made intuitively. But it will be the right move for me to make; destiny guides me!

11th House/Month of November: Four of Wands. My third of three cards from the Suit of Wands shows that the month of November will be filled with celebration! Perhaps this is the post-job move/career shift from the month of October’s celebratory party? The Four of Wands has to do with celebrating done on a vast scale, though, as the 11th House has to do with Friendships, Groups, and Wishes. This could indicate me getting married again, ha ha! Romance, increase, joy. I love it! Bring it!

12th House/Month of December: 9 of Pentacles. Wow, my fourth of four total Pentacles cards in this spread is an excellent card to conclude 2020! It’s a card denoting material well-being, leisure, and relaxation after accomplishment: I’m golden! The 12th House has to do with Spirituality and the Hidden (Occult) forces shaping one’s life, so this will undoubtedly be a very fruitful time for my personal spiritual practices; it can speak to having a very rich inner life. The 12th House is the House of Karma as well so it’s a Cosmic Indicator that I’ll be reaping some well-deserved rewards after enduring so much personal suffering since 2017. Well, it’s about freakin’ time!

All in all, I am very pleased with this spread. I love my Significator card! The themes I see  here are ones of being rewarded, emotionally and especially materially, for the strife I’ve previously gone through. I’ll be making significant career moves for the better and my romance prospects look very promising, yay! There are opportunities for travel and literal movement as well as personal inner evolution and taking the time to celebrate life’s many blessings in very big ways.

I wish you all a safe, healthy, prosperous, and love-filled New Year!

Be blessed and blissed: So Mote It Be!