As the global COVID-19 pandemic continues, illustrating the ongoing destabilizing effects of January’s epic Saturn-Pluto conjunction in Capricorn, the month opens with another show-stopper of a Capricorn conjunction between two planetary heavyweights: Jupiter and Pluto. It amazes me how many big-name astrologers are ascribing positive energies to this conjunction. “Jupiter! Our Great Benefic!” they cry. “He expands whatever He touches!” Yes, He does. However, unchecked expansion is not always a welcome thing! Think of cancer-causing free radical cells, for example. They’re a Jupiterian phenomenon in the body, expanding the influence of a terminal disease.

Pluto destroys, often with power struggles involved (this is especially true with Pluto’s current transit in authority-obsessed Capricorn). That’s His job; He has to destroy in order to pave the way for Something New to come into being.

Jupiter, as previously noted, expands the effect of whatever planetary bodies He comes into contact with (measured by mathematical degrees of spatial relationships known as aspects), for good or ill. A half-orb degree of conjunction (meaning this is extremely tight) between Jupiter at 25° Capricorn and Pluto at 24° Capricorn, exact yesterday, April 4, is accelerating the global death toll of this virus and its influence will continue to ripple out throughout the remainder of the year. Period. (Mark your calendars: the dance between Jupiter and Pluto will also recur on June 30 and November 12.) Dispatches from the Centers for Disease Control here in the U.S. are issuing grim forecasts for the next couple of weeks in terms of sharp increases in COVID-19 deaths in the country. As astrology teaches those who will listen, “As above, so below.”

Adding to the unease of uncertainty over this whole, life-consuming pandemic situation is the conjunction between mentally astute Mercury and illusion-weaving Neptune at 16° of Pisces. This conjunction was exact on Friday the 3rd and its influence will linger for the first half of the month, eased somewhat by Mercury’s entry into the Cardinal Fire Sign of Aries on the 10th.

A Piscean conjunction between Mercury and Neptune, the planetary ruler of Pisces, can give rise to fearful thoughts of the Unknown. When will stay-at-home orders issued by entire countries on lockdown (such as Italy or Spain) or States in the Union like my own state of Illinois desist? Can we predict when life will “return to normal”? How soon can a vaccine be released to the public? At the time of this writing, none of these things can be known. Mercury in Pisces in the shadow of Neptune projects our waking fears into our subconscious minds, unleashing a veritable tsunami of disturbing images in our sleep.

Propensity for Violence: The April 7 Full Moon at 18° Libra

As an astrologer with a lot of Virgo and Aquarius energy in my own chart, if there’s one skill set I possess in spades, it’s calling things out as I see them. I never sugarcoat unpleasant truths, preferring to state things bluntly and clearly.

I’m extremely concerned about what I’m seeing as the planetary backdrop to this Libra Full Moon, which will be exact at 9:35 p.m. CDT on April 7 (please adjust the time accordingly for where you are in the world). 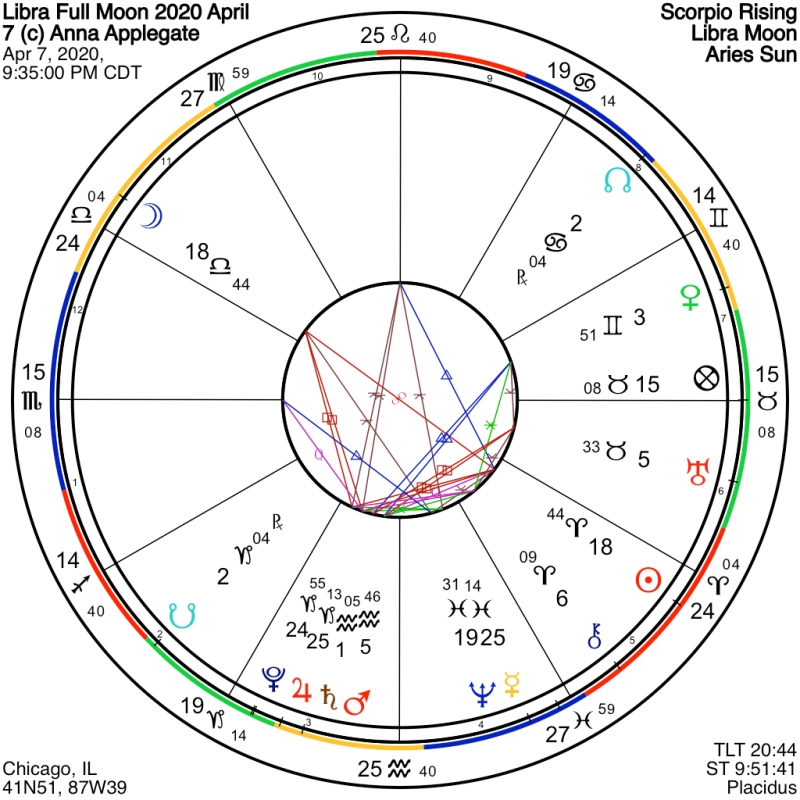 Emotionally, for starters, this isn’t a Moon that we’re going to be able to dismiss so easily. The Libra Moon will be forming strong squares to underworldly Pluto and expansive Jupiter, ensuring emotional intensity (the surfacing of repressed traumas from our personal underworlds being a likely phenomenon at this time) and upping what I’m calling the “crazy factor.”

One of the major players in this Moon is Mars, which is currently transiting the Fixed Air Sign of Aquarius. Mars at 5° Aquarius will be forming a sextile to the asteroid Chiron, the “Wounded Healer,” currently transiting 6° of Aries. This can bring up extreme feelings of anger over our own core wounds or sense of victimization. If already-unstable individuals feel that others are downplaying or minimizing the injustices they’ve suffered, that the ways in which they’ve been victimized are not being “heard” by others (in authority) or resolved with justice, they may lash out with physical violence as a response during the window of this Full Moon period. This kind of energy fuels workplace violence, mass shootings, and related phenomena. Watch the news headlines.

Exacerbating this propensity to violence is Mars’ simultaneous square to unpredictable Uranus transiting 5° Taurus at the time of the Libra Full Moon. Mars-Uranus squares always denote days of needing to practice extreme caution. This energy often manifests as physically violent accidents involving metal (which Mars rules), from (often fatal) car accidents to fires, especially electrical fires (Uranus rules electricity). Please be careful if you must venture out of your house at this time and under no circumstances should you allow any altercations, especially with strangers, to escalate. People will absolutely be losing their shit over the merest of trifles. Don’t be within range when they do. If you are a construction worker or electrical engineer, please exercise extra caution at your job sites.

“Fate is what happens to you. Free will is how you choose to respond.”
–Astrologer Rick Levine, Personal Communication, May 28, 2018

As if the energies I’ve described thus far making for challenging days in the second week of the month weren’t enough, we have conflict-promoting and stress-enhancing energies wrought by various planetary squares reaching their peaks on April 14 and lasting through the 28th.

We’ll get an emotional replay of January’s Capricorn energies on April 14 as the Moon at 23° Capricorn forms a conjunction with shadowy Pluto at 24° Capricorn, while this same Moon squares the Sun at 25° Aries. Who’s in control? Deep energies will be at work here, digging up conflict and challenges with authority.

Once the Sun leaves Aries Fire for the Fixed Earth of Taurus on April 19, we’ll have a major square between the 0° Taurus Sun and Saturn at 1° of Aquarius. This square doesn’t just portend issues with authority figures (Saturn), but potential roadblocks when it comes to life-altering decisions. Will you be able to move forward with what you need to do or not? Look at the nature of the obstacles that surface at this time (they might come into being days before or after the Sun’s exact entry into Taurus). This aspect makes me severely doubtful of the U.S. economy making a rebound anytime soon.

In fact, I see very bad economic headlines surrounding the time frame of the New Moon at 3° Taurus on April 22. (The New Moon will be exact on 9:25 p.m. CDT that day.) Normally, a Taurus New Moon would kick-off a period of economic stability, the greening of our bank accounts and overall flourishing of a bull market. (Yes, Taurus energy is literally what stock market analysts celebrate when they speak of a “bull” market!) But given that this particular Taurus New Moon occurs within a backdrop of a nasty square between dour Saturn at 1° of Aquarius and Wild Card Uranus at 6° of Taurus, all I see are minus signs before the DOW and NASDAQ industrial averages. The tech sector is especially going to be hit, with cybercurrencies taking a massive plunge. I also expect the news headlines at this time to announce online security breaches of major impact and severity–something affecting millions of customers. Pay attention.

As I mentioned earlier, fleet-footed Mercury enters Aries on April 10, and on April 25, the  same day that Pluto turns Retrograde (lasting until October 4) in Capricorn, Mercury will initiate two squares from the 25th through the 28th (first to Jupiter at 26° Capricorn then Pluto at 25°, respectively), making for difficult communications the last two weeks of the month. The temptation will be to engage in verbal abuse: just don’t go there, as the effects can be severe and more longer-lasting than usual (e.g., getting fired from your job for running your mouth, saying something inappropriate, trafficking in gossip, etc.). Misunderstandings can run rampant. From a data perspective, just as with a Mercury Retrograde period, back up your important data files. Channel your mental agitation through physical exercise: a walk at a relaxed pace around your block can work wonders to calm down your heart rate and give you a fresh perspective on your problems; just don’t forget to practice social distancing!

“Gosh,” you’re probably thinking to yourself if you’ve read this far, “this is a downer of an astrology blog post, Ana! Why this focus on the planetary reasons for the shit-show we’re having here on Earth?”

And my response to you would be: “Because I agree with Winston Churchill when he quipped, ‘Let our advance worrying become our advance thinking and planning.'”

It’s important to have the cosmic perspective on the frustration we’re all feeling because of the fact that our lives have been put on hold, seemingly out of nowhere. When the outer world presents standstill and apparent roadblocks to advancing life goals, use this time to plan, to research, to dream, to connect with yourself and virtually reach out to others. Call or FaceTime that friend who lives out of state. Call your elderly neighbor who doesn’t have access to digital resources. Understand why it’s a bad idea to have your children hug a person like me who is at a higher risk for contracting COVID-19 than others. (I’m an asthmatic.) Use this time to bolster your solitary or family-based spiritual practices. When you can’t go out, go within. Practice radical self-care.

The Moody Blues, that classic / psychedelic rock band I lovingly term “The Troubadours of the Ages” because of their amazingly enchanting repertoire of music, said it best with “In the Beginning” on their 1969 album, On the Threshold of a Dream:

“There you go, man

Keep as cool as you can

Face piles of trials with smiles

And keep on thinking free”

From my friends who run Chicago’s Alchemy Arts metaphysical bookstore and Occult community space, I share their COVID-19 banishing spell! Recite it while you wash your hands, folks!

(And please, support your local small businesses who can facilitate online orders, from shops to restaurants! Thank you!)

One thought on “Piles of Trials: April’s Astrologically Ornery Days”