I’m going to state my personal bias up front: This is an astonishing modern grimoire written by a personal friend of mine who is an extraordinarily talented Witch, artist, writer, and devotee of the Goddess Hekate: Jeff Cullen. In 2019, he approached me and announced that he was going to be developing the idea for Liber Khthonia into a book. In addition to consulting me in an editorial capacity to discuss the structure and content of the manuscript (I did copyedit the final draft), Jeff honored me greatly, knowing of my reputation in the Chicago Pagan community as a Priestess of Hekate Khthonia, by asking me to write the book’s Foreword! I was thrilled to do so and saw the entire undertaking of the publication of Liber Khthonia as fulfilling a vital need among the Goddess’ ever-growing number of devotees worldwide who have been yearning for just such a book to deepen what can only be called a devotionally anchored Hekatean Tradition of Witchcraft. The book, hot off the presses, is now available in a handsome hardcover edition that truly belongs on the library shelves of every Witch who adores the Queen of Witches!

The few books I’ve seen in the past 15 years or so that have been published by contemporary Witches and Pagans that focus on the Goddess Hekate as a subject tend to, unfortunately, be skimpy volumes that leave the devotional Polytheist reader lacking: information on step-by-step creation of altar spaces or full-length rituals is sparse; the how-to of honoring Hekate in the Company of Other Gods is hardly ever mentioned; and little by way of artistic inspiration exists in any incorporated line art or grainy photographs of those publications.

Liber Khthonia is markedly different in all those respects. It opens with an actual Conjuration of the Goddess and subsequently immerses the reader into every aspect of creating or deepening a devotionally centric Tradition of Hekatean Witchcraft. Chapters include a historical overview of how Hekate was viewed, revered, and feared from Classical antiquity to Early Modern Europe; Polytheism and Witchcraft in the Mediterranean; how to go about identifying what your personal or household cultus to Hekate will be, based on Her various cult titles and functions; setting up your altars or shrines and consecrating the agalma (cult image) of Hekate; the use of lustral water and sacred fire in daily rituals; working tools to incorporate in Hekatean Craft; an overview of sacred days and festivals; creating your own prayers and rituals; a discussion of other Deities and how They may be partnered with Hekate for rituals, daily devotions, or spellcraft (the Great God Pan is Jeff’s other Patron Deity); an extensive exploration of herb, root, and stone lore correspondences in Hekatean Craft; Jeff’s time-tested recipes for incenses, oils, and potions for a variety of devotional or spellwork applications; and so much more. At over 300 beautifully typeset pages, this is a substantial book that covers all aspects of theorem and praxis when it comes to serving the Goddess Hekate. 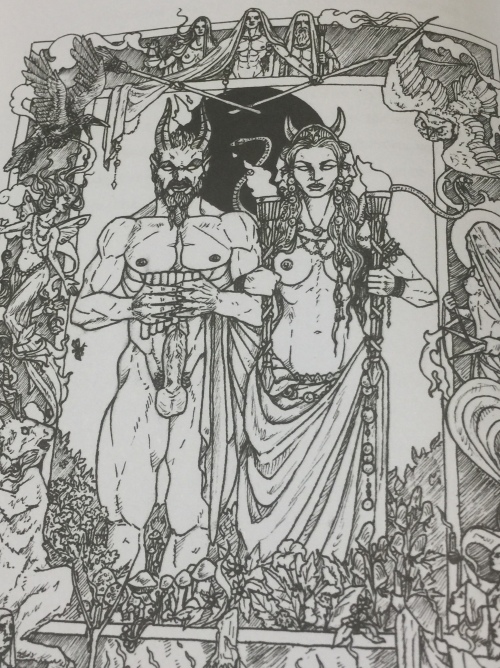 An example of Jeff Cullen’s stunning artistry to be found in the pages of Liber Khthonia: “The Gods of the Witches,” line art facing Chapter 13, “Other Gods.”

A Gorgeous Work of Art in Its Own Right

Aside from being immensely practical, Liber Khthonia is an inspired and inspiring work, a delight to hold in one’s hands and a beautiful addition to any Hekatean altar space or occult library. The pages are beautifully typeset on parchment-like paper stock and feature silver gilding on the edges, matching the silver font on the cover; this gives a striking and appropriate “lunar” quality to the book. 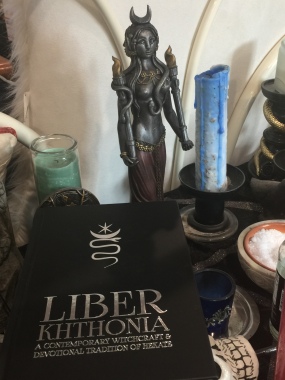 Jeff Cullen’s Liber Khthonia adorns my own daily devotional altar to Hekate. And he even made my Hekate statue! He is one seriously gifted Witch! 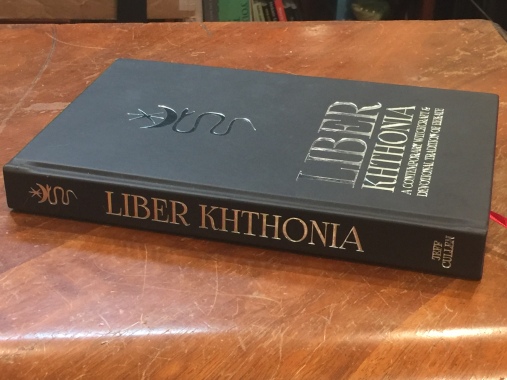 A treasured occult tome you will want to proudly display!

Liber Khthonia also features more than a dozen of Jeff Cullen’s original, beautiful and intricate line drawings, from depictions of various epithets of Hekate (Hekate Soteira, Hekate Einalia, etc.) to magical sigils and other occult symbols devised by Jeff and tested by years of his personal experience in the Craft. Look at the image of “Medea’s Hekate” that faces the opening page of my Foreword to the book; I seriously need Jeff to develop this into a tattoo flash for my next ink job!

A peek at the Foreword I wrote to Liber Khthonia, with Jeff Cullen’s stunning artwork of “Medea’s Hekate” on the opposite page. Look at the beautiful font and typesetting of these pages; even the footnotes are elegant notes in the margin!

The artwork of this book is so breathtakingly beautiful, it’s a good thing that Jeff Cullen made the wise decision to print versions of it as a separate product offering, as these images are worthy to serve as altar focal points on their own. And if you’re a tactile Witch like me, you can also carry a tangible expression of your faith with you wherever you go with the accompanying pocket icons (they’re two-sided and incredibly detailed) and pins made from some of the art in Liber Khthonia.

Front side of pocket icon.

Back side of pocket icon: note the prayer along the border!

Nifty pin of the main sigil from the book.

To sum it all up, Liber Khthonia: A Contemporary Witchcraft & Devotional Tradition of Hekate is the answer to the prayers of Hekatean Witches and devotional Polytheists the world over who have been desperately searching for a book that covers all aspects of starting and maintaining a devotional relationship with this Great Goddess and effectively calling upon Her for empowered spells and rituals. This book expresses the vibrant, lived-on-a-daily-basis, devotionally grounded Tradition of Hekatean Witchcraft practiced by Chicago’s own Jeff Cullen for decades and now shared with the world. It’s a gorgeously burning flame of inspiration, ignited by Hekate Herself, to be carried forward as a torch of the Craft to future generations of Witches and Contemporary Polytheist Clergy. May its words and images illuminate the hearts of Hekate’s serpent-kissed devotees everywhere!