Our Big Daddy of the Zodiac is on the move; starting this Thursday, May 13, at 5:36 p.m. Central Standard Time (please adjust to your corner of the world), Jupiter enters the Mutable Water Sign of Pisces. This signals a major shift in the collective consciousness!

Jupiter’s entry into Pisces starts this Thursday and He progresses in the sign until the 29th of July, when He will begin to Retrograde—eventually returning for a stint in Aquarius’ Fixed Air for the duration of the late summer and autumn months.

We have a major Elemental switch as well as a shift in the collective zeitgeist. Jupiter, rounding out His transit in Aquarius, has brought a cerebral (Air) focus to our lives: high-tech and other innovative solutions to improve human welfare in the past year and a half. The Aquarius transit helped accelerate, for example, the COVID vaccine approval and adoption process around the world: Aquarius is interested in achieving the highest good for the greatest number of people. It’s the penultimate humanitarian sign.

Other scientific marvels pursued with Jupiterian zeal pertain to the space race and commercial space flight initiatives (the eventual goal to make space travel a form of leisure…if you can afford it!), robotic expeditions on Mars,  advancements in AI, immunotherapy breakthroughs in cancer research (a keen interest of mine given my day job), and increasing use of renewable/electric energy sources (especially in the automotive industry).

The Elemental switch from Aquarian Air to Piscean Water brings a redirected focus on the well-being of our individual inner lives/inner realities. We turn our attention from the scientific to the mystical and the spiritual. With all the sweeping changes affecting the outer world, how have we been responding internally? Have crises brought the response of sharpening our spiritual sensibilities? Have those inner lives we lead proven to be “more real” to us in a time when benchmarks of outer world stability (stable personal jobs/personal or family incomes and national economies) have crumbled away in the wake of the pandemic?

Outer-world crises that are beyond our control always evoke a collective response of a turning to the spiritual and even the supernatural for comfort or for answers. For example, it’s no coincidence here in the U.S. that as the Civil War raged in the nineteenth century, Spiritualism bloomed. The same was true in England and other European countries in the period between World Wars I and II.

Since Jupiter likes to expand whatever He touches, His transit in Pisces will bring a greater collective awareness to (and even media reporting on) the role of religion in our lives, our personal practices, the credibility of psychic phenomena and spirit encounters, and a sense of heightened personal intuition.

People born with Jupiter in Pisces will really feel a benevolent, rippling-out effect of this transit in their lives, creating a sense of good fortune in whatever House of their natal charts Jupiter in Pisces appears as well as the House Jupiter will be transiting in their charts for the next year and a half. Jupiter-Pisces people who happen to currently work in the religious or nonprofit spheres, philanthropic organizations, etc. will especially attract windfall after windfall opportunities and other markers of growth and “brand awareness” expansion.

Of course, every Sun Sign has its positive and negative poles of energetic expression, so the negative forms of Jupiter in Pisces energy can manifest as religious fundamentalism and substance abuse/addiction issues (people turning to alcohol and drugs to escape). These issues will certainly be making some news headlines.

This is the snapshot of the sky I’ve taken for Jupiter’s entry into Pisces for Thursday. It’s set from a Chicago perspective, so please adjust the date and time for your time zone accordingly. 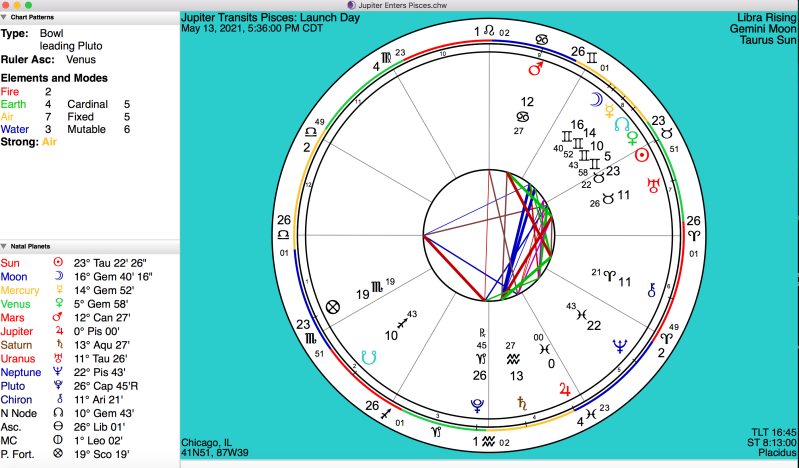 Right out the gate, Jupiter in Pisces will be forming a loose Trine with Mars transiting Cancer, a Watery placement that has the Warrior Planet in His “fall” position (where a planet is weakest; the opposite of where it would be exalted [for Mars, that is Capricorn]). Nonetheless, this will be a great day for articulating feelings as they affect home and family life (Fourth House) as well as in legal matters, higher education, religion, philosophy, or publishing (all Ninth House vocations). Negotiations/legal proceedings will be equitable and fair-minded.

The stellium of planets in chatty, idea-trafficking Gemini (Venus, North Node, Mercury, Moon) will obtain support from a stabilizing trine to Saturn in Aquarius, deepening and concentrating mental focus and powers of communications. Newly championed ideas will be put to a test for Saturn’s seal of approval.

As He journeys farther into Piscean waters, Jupiter, like Neptune in His home sign of Pisces, will form a sextile with transformational Pluto at 26° of Capricorn. The Neptune-Pluto sextile will be tight on May 13, giving all of us unusually clear insights into power dynamics as well as some memorable dreams. Keep a journal or recording device by your bedside and record those dreams before they dissipate in the light of day! Revelations, and even communiqués from the spirit realm, are heightened. If you’re in a creative profession (especially if you’re a Sun Sign Pisces, Cancer, or Scorpio), make great use of this energy! New ideas and an outpouring of creativity are there to harness and shape as you Will.

How Will This Transit Affect You? 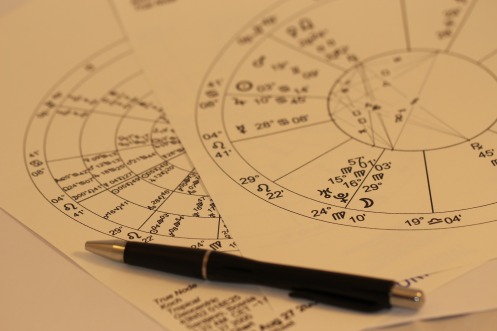 If you’re curious as to how this transit will manifest in your own natal chart and which life areas will be designated as “lucky” for you by Jupiter’s entry into Pisces, feel free to contact me at jackalmoondesigns@gmail.com. I have a variety of horoscope packages available to suit anyone’s budget, and would love to schedule a Zoom chat to go over the findings of my planetary detective work on your behalf!

Hail and Welcome, Jupiter in Pisces! May you strengthen our collective perception of the Infinity of Life where we are! So Mote It Be!