So we’re immersed in a bit of a cosmic paradox, eh? Here we are, just out of the starting gate of a brand new year, eager to implement all the grand plans we’ve resolved to weave into the tapestries of our life stories in 2016…and along comes a series of astrological events that are the equivalent of STOP signs: a Mercury Retrograde (first in Aquarius for all of two days, then backtracking into Capricorn–in fact, all four Mercury Retrograde periods this year will occur in Earth Signs), starting today; also starting today, the Capricorn Sun conjuncts powerful Pluto, and this aspect seeks to destroy and rebuild foundational structures in our lives, individually and at the collective level (a legacy of the messiness that we’ve inherited in the past four years of the potent and painful Uranus-Pluto square, which I’ve written about here); and this coming Thursday, the 7th of January, will have benevolent and bulbous Jupiter, our Daddy Warbucks of the Zodiac, going Retrograde until the 9th of May (but not leaving the Retrograde shadow period until early August), making us feel as though our personal development is being curtailed, ill luck is prevalent, and cosmic resources are that much more difficult to access. (The opposite, of course, holds true if you were born during a Jupiter Retrograde: this is one of your luckiest times of the year!)

The effects of Direct and Retrograde movements of the outer planets–as well as the moments when those planets shift signs–are akin, in my view, to getting a preponderance of Major Arcana cards in a Tarot reading: Not only will the external circumstances of your life radically alter, but the processes of dismantling and rebuilding of those life circumstances are orchestrated by Holy Powers for your greater good, even if you’re incapable of seeing that goodness in the midst of the upheaval wrought by sweeping changes. As a Hawaiian friend of mine said to me in 2011 as I found myself navigating new and very scary waters after being laid off a job I loved, “Have faith and trust the process.”

Her words resonate with me now as I take an eagle-eye view of the noteworthy astrological phenomena that will make this year a memorable one, for better or worse (tip to my Pisces friends and my fellow Virgos: Brace yourselves for the solar eclipses in Pisces and Virgo this year; March and September will be particularly dynamic months). When external forms crumble away, take a deep dive into Self and access your inner wisdom to rebuild the foundation of your life. And that means making self-care a priority: proper nourishment, rest, exercise, finding healthy outlets to cope with stress (that includes time spent playing Fallout 4 in my book!), surrounding yourself with supportive loved ones and inner circle-level friends–the basics of energetic and physical renewal.

It’s funny, I had none of these concepts in mind as I took time for solitary meditation on New Year’s Eve, my Bodacious Beau™ a few feet away from me in the living room (happily undertaking quests in Fallout 4!), and I proceeded to clear the dining room table so that I could perform my time-honored tradition of looking into the Tarot to see what awaits me month by month in the coming year. I grabbed my Marseilles Tarot deck, which was gifted to me by my late Uncle Milan when I was 15 and which served as my sole divinatory tool for many years. (It’s a great, albeit exacting, tool for learning the Tarot because there’s little by way of pictorial symbolism in the Minor Arcana cards, which meant that adolescent me really had to memorize my card interpretations for upright and reversal placements.) I did my grounding and centering procedure and lit a cheerful red candle on the table as well as some Jupiter incense (as New Year’s Eve took place on a Thursday). I prayed to Hekate Khthonia, one of my Patron Goddesses and in Whose Name I always perform divination:

Hidden Hekate, to me show what it is that I must know!

I shuffled and cut the cards into stacks of three and rearranged the stacks into one stack, breaking them to repeat the shuffling and cutting process two more times. I felt that my mind had utterly “gone hollow,” and that I was in as receptive a state as I was going to be. I fanned out the cards, face down, and swept my left hand over them all spread out on the table, choosing, one after the other, 13 cards total, starting with the Significator and ending with the card representing the month of December/my 12th House in astrological terms. 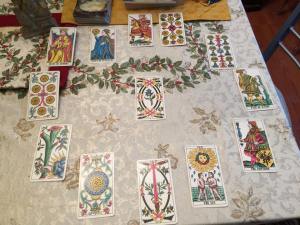 My Significator: The Four of Swords. This is going to be a year for me to regroup, not expend so much energy externally oriented. This card is akin to the Goddess Nephthys’ energies: to put it in Theosophical terms, it’s the Voice of the Silence.

Card 1 representing the month of January, and my 1st House of Self: The 6 of Pentacles. This bodes very well for me as someone actively job hunting while still employed: lucky financial chances, an increase in fortune. Gifts out of the blue. My financial well-being is intricately tied to my concept of self-worth, what I value.

Card 2, the month of February as well as my 2nd House of Earned Income: The Ace of Wands. Blammo! A fortunate entrepreneurial move! An excellent card denoting growth, vitality, fertility/virility. Could I in fact be starting a new job as soon as next month? Mercury will be out of its Retrograde shadow period, so that would be an excellent time for signing new contracts! Ooo-weee!

Card 3, the month of March as well as my 3rd House of Communications: The Ace of Pentacles. More good fortune, huzzah!: a new financial beginning, contented prosperity. With Mars in Scorpio energizing 3rd House endeavors for all Virgos, this would be an excellent time to launch a website, refine social media marketing strategies, and drive real ROI for doing so. The 3rd House also governs short trips, so expansion through communications and commerce? Business travel, as to a trade show? I’m game!

Card 4, the month of April as well as my 4th House of Home & Family: The 3 of Swords. This is the only “ugly” card in my spread. Heartache, separation, sadness, loss. Honestly, I most fear losing one or both of my parents. My mother’s health is more precarious, so this has me apprehensive. I pray that I’m wrong and that this card winds up meaning something far less traumatizing, perhaps the breakdown of appliances or some other expenses related to household maintenance.

Card 5, the month of May as well as my 5th House of Creative Self-Expression: The Sun. Phew! Whatever icky thing happens in April, I’ll be on the way to wellness in May thanks to the rejuvenating, inspiring, cheerful energies of The Sun in my 5th House. This is an excellent card for kick-starting creative projects, tapping into the flow/getting in the zone of creativity, and being successful at it, even finding artistic acclaim as a result.

Card 6, the month of June as well as my 6th House of Service & Health: The Emperor. Wow! This was my Significator card last year, and it’s always a welcome message. This will be the month to exercise my leadership muscles (perhaps leading more workshops at Pagan Spirit Gathering?) on behalf of others. I will be a stabilizing force, respected for my authority.

Card 7, the month of July as well as my 7th House of Marriage & Partnerships: The Page of Wands. Of course, this has me thinking literal marriage thoughts since my Bodacious Beau™ and I are engaged, and this is a Fire Sign card (he’s an Aries). If interpreted as a person, this card denotes a faithful lover, a very loyal man, of which I’ve never had any doubt from the beginning. If interpreted as something abstract, this card could represent important news on its way (next month’s card) or even a possible short-term trip. But what if we do wind up eloping (as we’ve said all along we want to get married in October) and going on a short trip? 😀

Card 8, the month of August as well as my 8th House of Intimacy, Sex, Death, & Other Peoples’ Money: The 6 of Cups. Emotional growth in relationships. A rekindling of innocence. Conversely, an unexpected financial windfall due to other peoples’ resources working on my behalf: investments, inheritances, and the like. Hmmmm.

Card 9, the month of September as well as my 9th House of Expanding Horizons: The 10 of Pentacles. Yaay! This is absolutely one of my favorite cards; it denotes domestic bliss, the link between prosperity and well-being, and a family’s connection with wealth/ancestral resources. However apprehensive I might be about the month’s solar eclipse in Virgo, I need to hold fast to the vision of this card and the promise of its rewards, emotionally and financially.

Card 10, the month of October as well as my 10th House of Status/Career/Public Influence: The Knight of Swords. Well, if Dan and I stick to our current plans of getting married in this month, we will be boldly charging forward into our new status as a married couple. I could also be rushing fearlessly into a work situation that might have me facing initial opposition. This Knight always triumphs over the opposition, however, so I’m not worried in the slightest.

Card 11, the month of November as well as my 11th House of Friends & Group Affiliations: The Queen of Pentacles. Perhaps I’ll come into some serious money to bequeath on a group I belong to, like contribute to the temple fund in a major way for our Chicago Fellowship of Isis Lyceum of Alexandria-Mishigami? Or a female benefactor will help us out? Or I myself will exude prosperity and opulence? This Queen is a helpful Earth Sign woman, whoever she is. She is generous and nurturing. Ave, Dea!

Card 12, the month of December as well as my 12th House of Occult Mystery & Karma: The Queen of Swords. Here’s another woman who may or may not be me (my Moon Sign and Ascendant are both Aquarius and I’ve always personally identified very strongly with this card): an Air Sign warrior woman, a fighting matriarch. She’s quick-witted and cuts through BS with ease. Is she my Holy Guardian Angel, with Whom I’ll make contact that month? Will that be the time to step up devotionals to sword-bearing Warrior Goddesses like Sekhmet, the Morrighan, or Kali-Ma? Working the 12th House calls for big-time solitary metaphysical exploration, so I think that will be an excellent endeavor to occupy myself with as 2016 draws to a close.

With the exception of April’s Three of Swords, there isn’t a negative card in the bunch, which makes me feel quite relieved, indeed! (Consider that my Significator two years ago was the Five of Pentacles, arguably the most hideous Tarot card ever! For me it’s worse than the 8, 9, or 10 of Swords, uglier and far more negatively disruptive than The Tower.) Job-hunting me is really excited about next month’s Ace of Wands and March’s Ace of Pentacles! I have two Major Arcana cards, they’re both incredibly positive, and they follow each other. The Knight of Swords is flanked by Pentacles cards, so if Dan and I manage to avoid eloping in July and we stick to our plans for an October wedding, the signs of material and domestic bliss are front and center!

Whether you choose to heed messages from the energies of the outer planets, or ones broadcast by the Small, Still Voice Within, or ones sent as directives from your Holy Powers and Ancestors, I wish you a healthy, happy, prosperous 2016–a year filled with joyous journeys of self-discovery! Hip, hip, HUZZAH!

One thought on “My Annual Year-Wheel Tarot Divination”