I’m going to state my personal bias up front: This is an astonishing modern grimoire written by a personal friend of mine who is an extraordinarily talented Witch, artist, writer, and devotee of the Goddess Hekate: Jeff Cullen. In 2019, he approached me and announced that he was going to be developing the idea for Liber Khthonia into a book. In addition to consulting me in an editorial capacity to discuss the structure and content of the manuscript (I did copyedit the final draft), Jeff honored me greatly, knowing of my reputation in the Chicago Pagan community as a Priestess of Hekate Khthonia, by asking me to write the book’s Foreword! I was thrilled to do so and saw the entire undertaking of the publication of Liber Khthonia as fulfilling a vital need among the Goddess’ ever-growing number of devotees worldwide who have been yearning for just such a book to deepen what can only be called a devotionally anchored Hekatean Tradition of Witchcraft. The book, hot off the presses, is now available in a handsome hardcover edition that truly belongs on the library shelves of every Witch who adores the Queen of Witches!

END_OF_DOCUMENT_TOKEN_TO_BE_REPLACED

It’s not often that I begin my day composing a Facebook post asking for pensive responses to a theological question of mine, but that’s how my morning started. Twelve hours and 100+ comments later, I’m reflecting on my musings, my Facebook friends’ insights (to the ones that overlap as readers of this blog, thank you for your input!), and it’s time to craft a blog post around it all. This was my inquiry for discussion:

Serious theological question for my fellow devotional Polytheists: Do you believe that the Gods you serve are limited in Their ‘outreach’ based on geography? Case in point: during my years in Hawaii, my contact with worlds-wandering Hekate and the Kemetic Deities I serve never abated (the Latter Group loved Hawaii, from my experience), but, try as I might, neither Odin or the Vanir were accessible to me out there. However, whenever I visited Chicago, my ‘line’ to Them was instantly reestablished. Upon returning to Hawaii, the spiritual phone line ‘went dead’ again until I moved back home permanently.

What have your experiences been with Gods and spatial/temporal boundaries?

END_OF_DOCUMENT_TOKEN_TO_BE_REPLACED

The Pleasures of Painting During Piscean Transits

Virgo me has been really loving the spate of benevolent planetary aspects involving Venus, Mercury, and Neptune in Pisces and the trine to Jupiter in Scorpio. (For an in-depth look at the month’s transits (applicable for all signs), read my post I published on Saturday.) Yesterday’s exact conjunction between Venus and Mercury in Pisces kicked off a frenzied spate of artistic creativity: I did three paintings from start to finish in less than 24 hours, a new record for me! Huzzah! END_OF_DOCUMENT_TOKEN_TO_BE_REPLACED

How Death Crashes Our Assumptive Worlds: A Dispatch from the Frontlines of Grief and Spiritual Crisis

Very sad and shocking news was relayed to me as I was about to get ready to shower and start my morning: my dear friend Kathryn, on whose behalf a multi-state healing prayer circle kicked off last weekend in preparation for her grueling cardiac surgery yesterday, died late last night. Apparently, the full moon eclipse energies ushered her out of this world and into the crystalline Otherworld of Caer Arianrhod, where Kathryn can journey to her ancestors and to her Brythonic Polytheist family of the Children of Don. END_OF_DOCUMENT_TOKEN_TO_BE_REPLACED

On March 13, after having been informed that I passed my comprehensive exam with 100% accuracy, I officially became certified as a Death Midwife. END_OF_DOCUMENT_TOKEN_TO_BE_REPLACED

So we’re immersed in a bit of a cosmic paradox, eh? Here we are, just out of the starting gate of a brand new year, eager to implement all the grand plans we’ve resolved to weave into the tapestries of our life stories in 2016…and along comes a series of astrological events that are the equivalent of STOP signs: a Mercury Retrograde (first in Aquarius for all of two days, then backtracking into Capricorn–in fact, all four Mercury Retrograde periods this year will occur in Earth Signs), starting today; also starting today, the Capricorn Sun conjuncts powerful Pluto, and this aspect seeks to destroy and rebuild foundational structures in our lives, individually and at the collective level (a legacy of the messiness that we’ve inherited in the past four years of the potent and painful Uranus-Pluto square, which I’ve written about here); and this coming Thursday, the 7th of January, will have benevolent and bulbous Jupiter, our Daddy Warbucks of the Zodiac, going Retrograde until the 9th of May (but not leaving the Retrograde shadow period until early August), making us feel as though our personal development is being curtailed, ill luck is prevalent, and cosmic resources are that much more difficult to access. (The opposite, of course, holds true if you were born during a Jupiter Retrograde: this is one of your luckiest times of the year!)

END_OF_DOCUMENT_TOKEN_TO_BE_REPLACED

On Grief and Grieving

The moon is my mother. She is not sweet like Mary.
Her blue garments unloose small bats and owls.
How I would like to believe in tenderness–
The face of the effigy, gentled by candles,
Bending, on me in particular, its mild eyes.

I have fallen a long way.

The more that I think about it, the less I believe what I experienced at 4:52 this morning was the ending of a dream. It was more of a spontaneous shamanic journey, the kind I’d had with disturbing regularity in the first two years of my brother Mark’s death. What I know for certainty was that I was in the Duat, and Sekhmet was next to me. She panted/grunted while scenting the air, Her lioness nuzzle awash in blood. Her pupils were massive, dilated, and gleaming like actual carnelian stones. Torch light either gleamed from behind or radiated from within Her. There was a wall behind us. We stood within a long, dark corridor. I knew unequivocally that Sekhmet protected me fiercely against evil entities that wanted to harm me. She fed on them. I was afraid–not of Her, but of where we were. I wanted out. And no sooner did I think that than did I feel myself being rapidly “plucked” upwards–in sheer nanoseconds. It was a jolting sensation, but I felt myself being pulled up out of the ground–even through my bed’s mattress!–before “crash landing” back into my body. I gasped and thrashed a bit–hitting my fiancé in the process–before sitting up and grabbing my iPhone from my nightstand. 4:52. END_OF_DOCUMENT_TOKEN_TO_BE_REPLACED 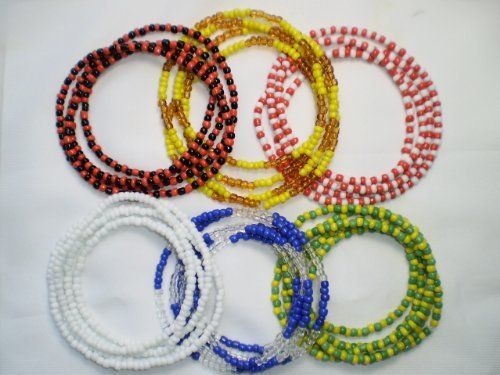 Roots and Rootedness, The Powers I Serve

Circles of Power: Reflections on Receiving My Elekes Initiation in Ifá

During my lunch break today, I swear I spotted an avatar of the Orisha Eshu. A young man skateboarding downhill on Adams Street in the shadow of the Sears Tower (yes, you read that right: as a native Chicagoan, I refuse to call it by any other name), weaving in and out of hordes of slow-moving tourists on this gloriously sunny and summer-like Monday. He sported a t-shirt that looked like a modified version of the Chicago flag: instead of the iconic series of four red, six-pointed stars, however, the word “Character” was emblazoned in large cursive script.

Ashé, ashé! I mentally affirmed as I read the t-shirt’s message and silently blessed the youth that whizzed past me. I pulled down on the collar of my shirt to expose my newly acquired elekes, and I said a prayer of thanks to each of the Orisha whose energies find manifestation in the individual necklaces ringing my neck, the necklaces I received this past Saturday night (the timing was interesting: Dark of the Moon and right on the cusp of the onset of a Mercury Retrograde period) in an initiation ceremony that lasted nearly four hours. END_OF_DOCUMENT_TOKEN_TO_BE_REPLACED

Rituals, The Powers I Serve

In Praise of Anubis, Neb-ta-djeser: Lord of the Sacred Land

What an auspicious and delicious Friday the 13th this has been, and I haven’t even left the office yet to begin my lovely and leisurely three-day Valentine’s Day/Presidents’ Day holiday weekend!  (Io, Aphrodite!) I’m just giddy that this is the first easy-going Friday I’ve had at my job in months. And while much of my focus, die-hard romantic gal that I am, is centered on the joie-de-vivre that my bodacious beau Daniel and I are sure to experience tomorrow at the Lyric Opera production of Wagner’s “Tannhäuser” (let’s get medieval!), February 14 is also a very special day for me because in the old Cairo calendar, it’s the Feast of Anubis, the jackal-headed son of my Patron Goddess, Nephthys. The Egyptian god Anpu or Yinepu–Anubis to the Greeks–has been making His presence known in my life in major ways in the past couple of weeks, particularly by offering His services as a spiritual guide and protector, so I’ve decided to set up an additional shrine to Him here at my office desk just now! (Crazy colleagues and clients, be gone!)

A serious contender for my next tattoo! I love how majestic Anubis looks but check out that fierce and fabulous Ammit towering above the scale! Gotta love that “Eater of Souls”! RAWR!

END_OF_DOCUMENT_TOKEN_TO_BE_REPLACED

Last night marked the end, in the Serbian calendar, of the “Unclean Days”–a period of time characterized by folk observances that reveal a commingled Pagan and Eastern Orthodox Christian sensibility. One of the major themes emphasized during this liminal 12-day period between the waning influence of the old year and the embryonic energies yet to crystallize in the new is the auspiciousness of performing divination.

Now, while my mother tells me that I had a great uncle in Serbia who performed divination by gazing into an old brazen bowl into which he read the shapes of a beeswax candle’s droplets in spring water, and my mother’s own mother told fortunes with a regular deck of playing cards as well as scrying in Turkish coffee grounds, I like to stick with the Tarot. But not just any Tarot deck–though, admittedly, like many Pagans, I have several at my disposal–my preferred one is the very first one to come across my petite priestess hands: a Marseilles Tarot deck given to me by my awesome Uncle Milan, my mother’s brother. During his 50 years of life (cut short by lymphoma) on this planet, he was an astute esotericist, Jungian psychologist, gifted viola player, and good-humored, pipe tobacco-smoking outdoors enthusiast. The Marseilles deck was his, given to me before my fifteenth birthday with a very knowing wink from his deep-set, coal-black eyes. END_OF_DOCUMENT_TOKEN_TO_BE_REPLACED