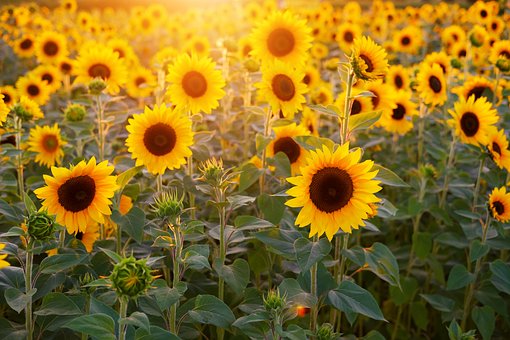 Rituals, The Powers I Serve

Twelve years ago today, my best friend (who is an amazing priest and vitki in his cultic tradition) Richie and I led a public Heathen devotional ritual known in some contemporary Norse Polytheist traditions as a faining (distinguished from the more-commonly-known ritual of a blòt; the former is distinguished by bloodless sacrificial offerings). It was a glorious day at a Lake County, Illinois-based forest preserve ritual location that I have always regarded as inherently sacred and immensely powerful: it is a place that shimmers with the energies of so many welcoming and helpful forest spirits, prairie spirits, and water spirits (lake and river). In attendance that Midsummer’s Day were good friends and notable Heathens in the community, such as my friend Atheleas, who served as the Illinois Steward for The Troth at the time, and several of her kindred members.

END_OF_DOCUMENT_TOKEN_TO_BE_REPLACED

Check Out My Newest JackalMoonDesigns Jewelry Listings on Etsy!

I’ve been a very busy gemstone-beading bee lately: yesterday, in fact, I made 6 devotional gemstone necklaces and uploaded them to my Etsy site, Jackal Moon Designs, and one (my Green Tara devotional piece) sold within minutes of it being advertised on Facebook yesterday afternoon. Here are the remaining five.

END_OF_DOCUMENT_TOKEN_TO_BE_REPLACED

Roots and Rootedness, The Crossroads of Art and Spirit

The 12 Days of Yuletide: A Heathen Carol

Do you love to sing, especially at this time of year? Or does your system require a little “liquid courage” to belt out those familiar tunes? Perhaps it would help to sing something  a bit friendlier to your spiritual sensibilities? To that end, I’ve composed a Heathen Yuletide carol, which is sung to the tune of “The Twelve Days of Christmas.” I dedicate it to my Heathen friends and to the God Bragi, Whom I invoked during my own group’s Winter Solstice celebration last night. If you sing my song or share it, please respect my copyright–that’s all I ask. Oh, and sing it with gusto with some mead, please! Enjoy and have a blessed Yule!

“The Twelve Days of Yuletide: A Heathen Carol”

On the first day of Yuletide, my true love gave to me…

A rune set carved from a pine tree

END_OF_DOCUMENT_TOKEN_TO_BE_REPLACED

As the holiday shopping season gets underway in full force here in the States, I’d like to encourage people to please support small businesses and artisans, especially in esoteric/metaphysical communities. I’ve had my Etsy shop, Jackal Moon Designs, active for exactly half a year now and I love creating pieces that help support Polytheists, Pagans, Magicians, and Shamanic Practitioners in strengthening their connections to their Holy Powers.

I’ve recently ordered a slew of pendants depicting various Deities and Spirits and will be uploading new beaded gemstones pieces on a regular basis. I’m announcing three that are new to my shop as of yesterday and this morning, reflecting the work of my crafty little hands over the weekend. They’re long, texturally rich pieces and one is made to honor Sekhmet, one to honor Frigga (depicted in the featured image for this post), and one to honor Odin. I accept a variety of payments on my Etsy site and ship worldwide. My pieces make great one-of-a-kind gifts or you can keep them for yourself! (Do note that I take requests for custom pieces if you don’t see the Holy Power you serve represented in my shop!) 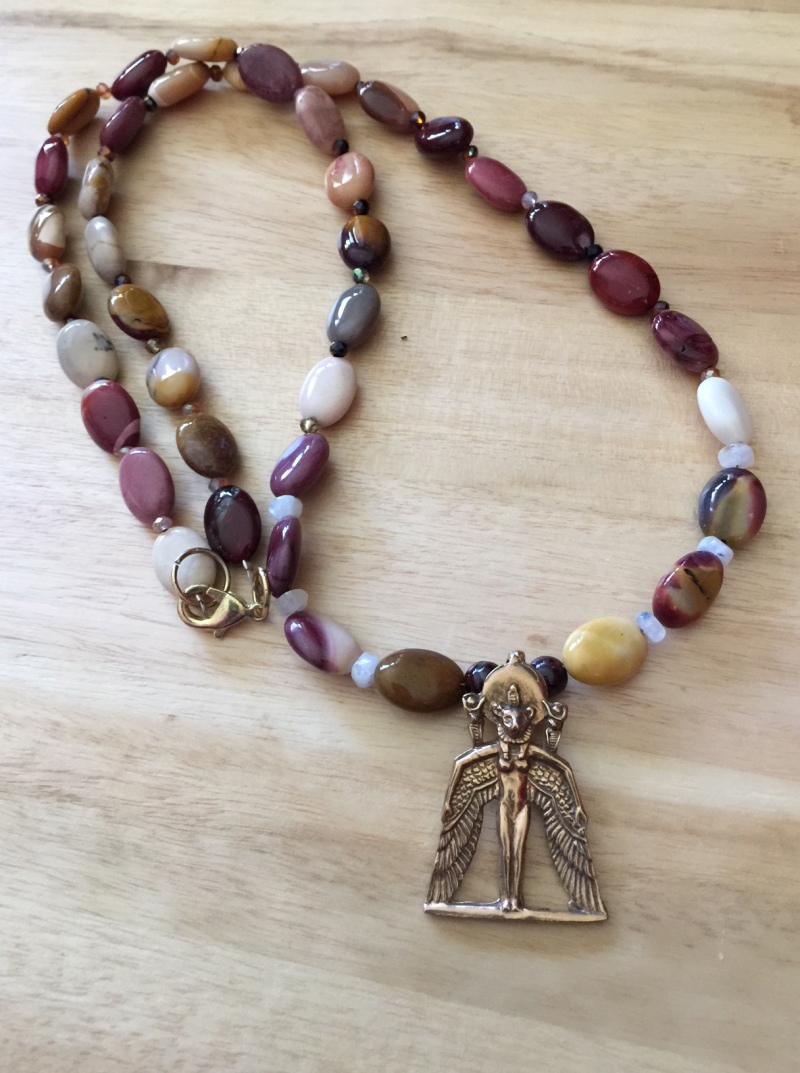 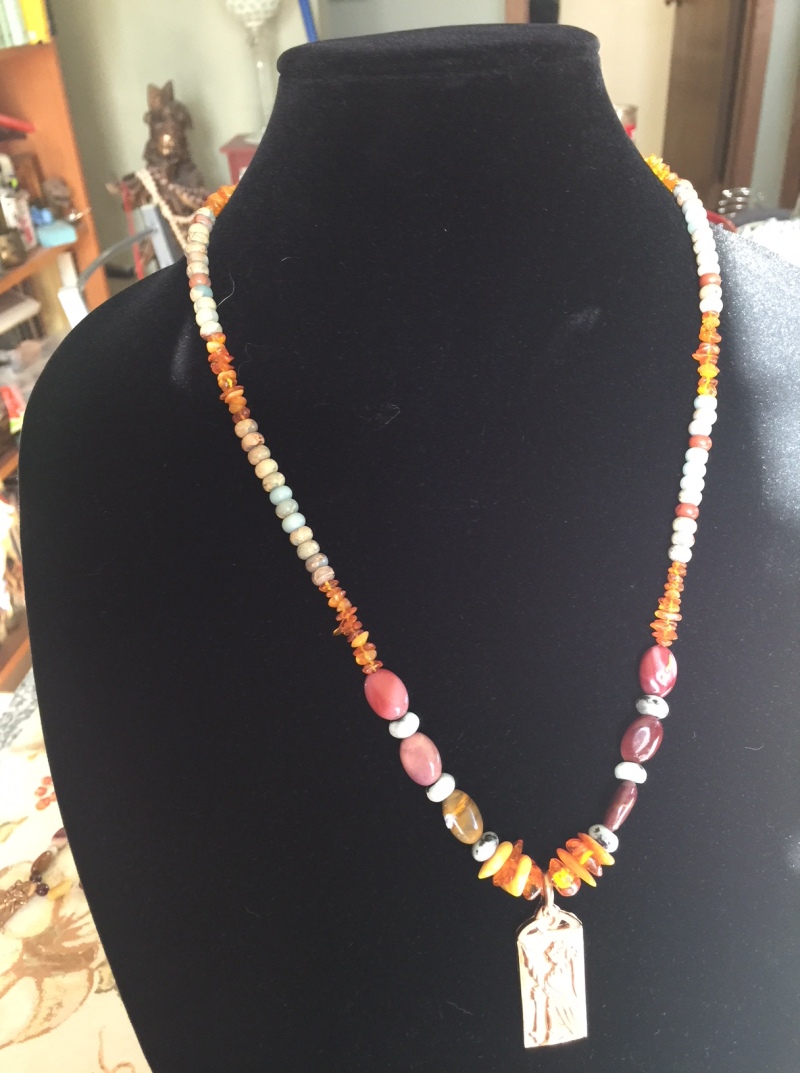 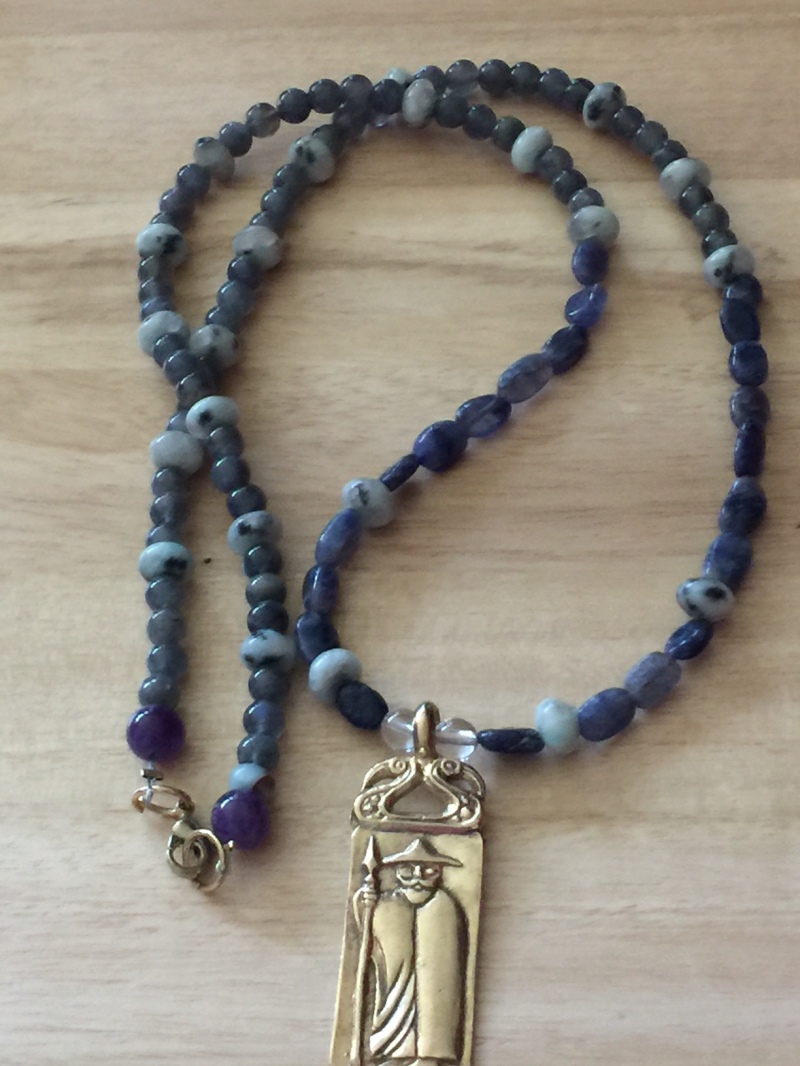 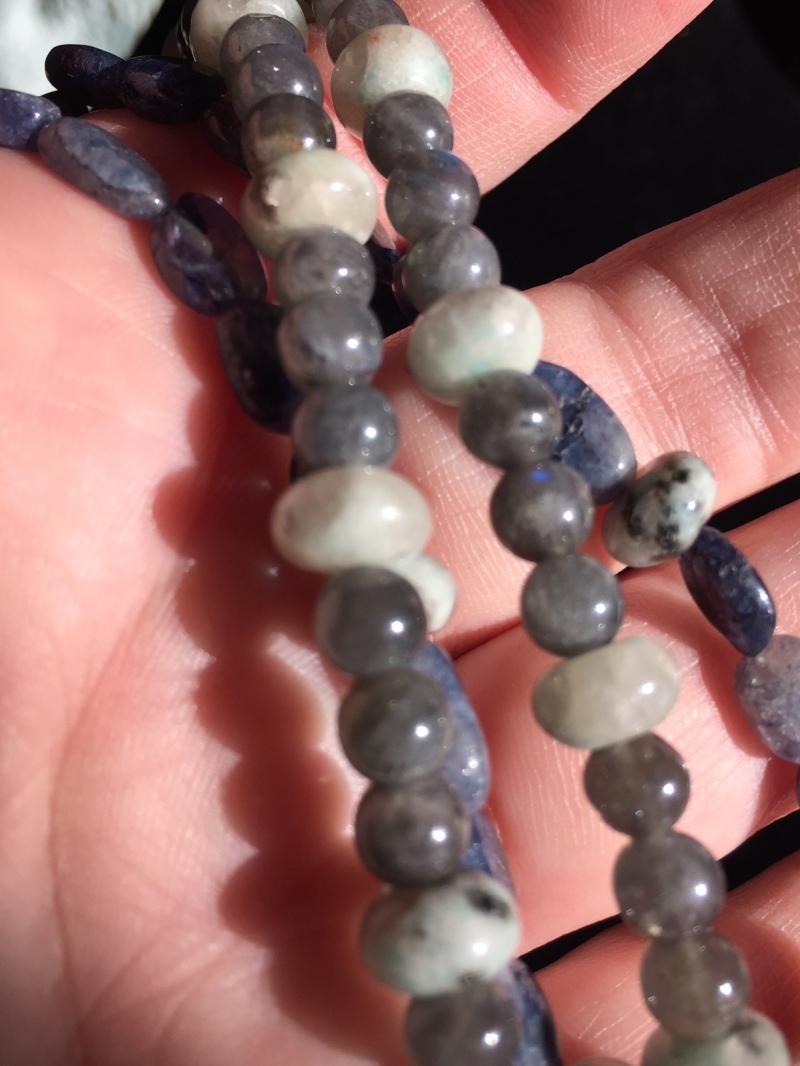 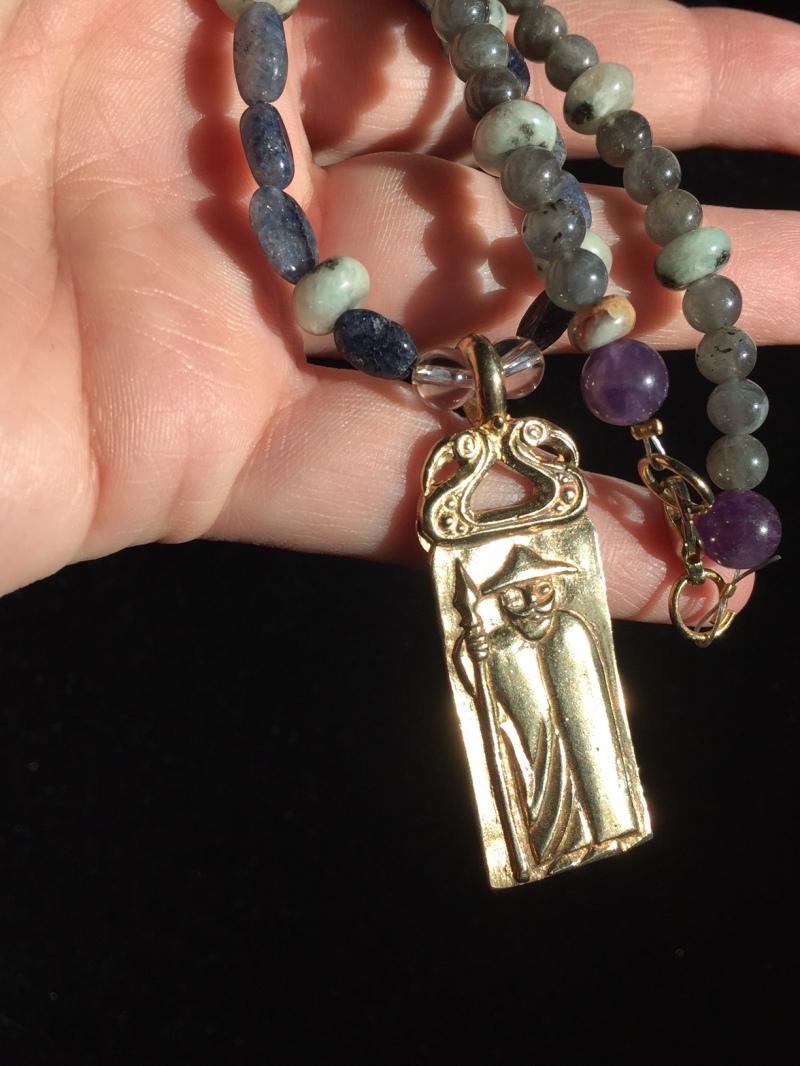 Thanks for taking a look at my site and please remember to shop small this holiday season!

The Fellowship of Isis in Chicago, The Powers I Serve

Editorial Note: This is the transcript of a talk I gave at the 24th Annual Fellowship of Isis Chicago Goddess Convention, October 28, 2017, at the North Shore Holiday Inn in Skokie, Illinois.

Good morning and thank you all for coming to our 24th Annual FOI Chicago Goddess Convention! For those of you who don’t know me, my name is Anna and I’ve been proudly serving as legally ordained FOI clergy since 2012, though I have been active in Chicago’s Pagan community for 18 years and counting. I’m the executive editor of Isis-Seshat, a quarterly publication of the Fellowship of Isis, and I’m the founder of the chartered Iseum of the Rekhet Akhu, whose mission is to highlight the interrelatedness of the communities of the living and the dead and to cultivate transfigured spirits (akhu in ancient Egyptian) in human form.

So why did I choose this topic? We’re in the season of Samhain, the Celtic reckoning of the end of summer and the liminal time between one year and the next, and during this time our thoughts often turn to ones of our own mortality, as well as to remembrances of those who have gone before us. More than any other time of year, the honoring of the Deities and Spirits of Death is top of mind for most of us.

As a show of hands, who here honors a Death God or Goddess in their personal devotional practices? (Pause.)

I’m a Polytheist devoted to such Holy Powers, and I’d like to spend some time with you discussing three in particular: the Norse Goddess Hel, Mexico’s La Santa Muerte (the Holy Death), and the Nigerian Orisha, Yewa—Who They are, Why They matter, and how you can cultivate a devotional relationship with Them if you feel Their bony hands laying claim on you. What’s striking about these Death Deities of various cultures—northern European, North American, and West African—that I’m going to talk about is that They’re gendered female and They’re regarded as virgins, so we have a lot of intersectionality to examine when we focus on what we know about each Goddess historically and what we know about Them in contemporary worship.

But before we start discussing each of these three Cosmic Femmes Fatales, I’ve got a few thoughts I’d like to share on what significance gender bears as well as historical notions of the concept of “virginity” and how these impact the mythologies and the cultic practices surrounding the worship of Hel, La Santa Muerte, and Yewa.

END_OF_DOCUMENT_TOKEN_TO_BE_REPLACED

Poetry, The Powers I Serve

A Friday Invocation to Freyja

Note: A former coven mate of mine shared this with me–hence the British spelling and the Gardnerian references to scourging and the like. I cannot speak to this work’s true origins.

END_OF_DOCUMENT_TOKEN_TO_BE_REPLACED

The Summer Issue of Isis-Seshat Magazine Is Now Available!

Hot off the presses!

I am pleased to report that I just returned from my print vendor, and the galley proofs for the Summer issue of Isis-Seshat–the official journal of the worldwide Fellowship of Isis–look fabulous!

END_OF_DOCUMENT_TOKEN_TO_BE_REPLACED

Hawaiian Ghosts, Roots and Rootedness, The Powers I Serve

Winter is finally starting to lose its vise grip here in The Chi. Daytime temps have been hovering in the 40s and 50s since Sunday, tolling a death knell for the mounds of snow. It’s actually possible to see patches of grass on peoples’ front lawns and in public parks once again, and the faintest buds are beginning to poke through the tips of tree branches. And so last night, for the first time in months, my Bodacious Beau™ Dan and I went out for a leisurely stroll in our local cemetery. That unmistakable angle of the almost-spring sun receding behind adjacent rooftops in the west just before it plunges into its deep, egg-yolk hue at sunset warmed both of our hearts immensely. Sparrows, robins, and turtle doves warbled and cooed from the neighboring trees. Indeed, all of nature seemed to be ringing out a symphony of joy, and I felt delighted to be unhindered in my ability to leave offerings for the spirits of the land and our Dunning neighborhood’s dead. I clutched my slices of homemade banana nut bread (the Mother Squirrel–I’ve named her Ratatosk as a nod to Norse mythology–residing in the Hel-Tree in the cemetery would surely be pleased!) to my chest and Dan and I grinned at each other as we traipsed our way through the soggy cemetery grounds. END_OF_DOCUMENT_TOKEN_TO_BE_REPLACED

Down in the Valley of the Not-So-Jolly Jotuns

Given this morning’s -30 F temperature and the omnipresent mounds of snow, it’s very easy to confuse the Chicago slice of Miðrgarðr for Jotunheim. Whizzing along on the northbound Tri-State, making my morning transition from Cook to Lake County during my drive to work, it was difficult to not find the landscape tinged with thurz-friendly phantasmagoria—look, there’s Fenris loping amidst the snow-laden oaks, sycamores, and aspens in Busse Woods; Skadi loves stomping about with her snowshoes in a childlike spirit of abandon in the gravelly pit of the major construction site at Willow Road.

I was listening to the sweet strains of Loreena McKennit’s liltingly lovely musical interpretation of Tennyson’s masterpiece, “The Lady of Shallot,” when it dawned on me—just as Sunna’s orange and scarlet robes blinded me in the rear-view mirror—that this day is absolutely, wholly, and unequivocally laced with death. The very air, reminiscent of that primal giant from whom the whole world was crafted, is tinged with it. Try inhaling without a scarf or other covering to shield your mouth while, say, walking a dog for 20 minutes and you’ll feel it, death like a form of anti-pneuma seeping into your lungs. A cold caress that makes your flesh and bones revolt to the touch. END_OF_DOCUMENT_TOKEN_TO_BE_REPLACED

Go to Hel, Part 3: Bound by Bone—Deepening My Devotion to Loki’s Daughter

The wallpaper on my work PC is a stunning 1905 painting by the German artist Emil Doepler. Entitled “Loki’s Brood,” I find throughout the course of any given workday that I completely lose myself in reverie as I look at Hel. It’s almost as if Her distant gaze, surely focused as it is on Other/Inner Worlds, mirrors my own as I gaze at Her and think on Her glorious Being. Is it possible to truly love—with all the inner reserves of affection and devotion that your heart is capable of squeezing out—a Goddess of Death? END_OF_DOCUMENT_TOKEN_TO_BE_REPLACED