Venus Retrograde 2017: Inanna in the Underworld

Every 18 months or so, the planet Venus appears to move backwards from our Earthly perspective for a period of roughly 40 days. This transit, known as a Venus Retrograde, has a deep impact upon us because it’s one of our solar system’s three personal planets (along with Mercury and Mars), so the effects are more greatly felt in our day-to-day emotions and experiences, unlike the effects of the slower-moving outer planets’ Retrograde periods (e.g., Jupiter, Neptune, Saturn, Uranus, and Pluto). Astronomically and esoterically, Venus will transform during this period from being the Evening Star that’s been seen on the Western Horizon at sunset to the Morning Star in the East. In order to do that, She (I speak of the planet and the goddess with equal reverence, so I capitalize the pronoun) will undergo Her period of retreat, taking us all into a symbolic Underworld journey to reevaluate our relationships and finances; what we value, including our own sense of self-worth; and what we find beautiful/aesthetically pleasing.

As of the wee hours of this morning Central Standard Time, Venus has stationed Retrograde at 13° Aries, a sign where She is said to be in Her detriment. At this archetypal level, Inanna has made Her descent into the Underworld. Today’s chart shows some planetary  aspects that make the onset of this Retrograde period really interesting: 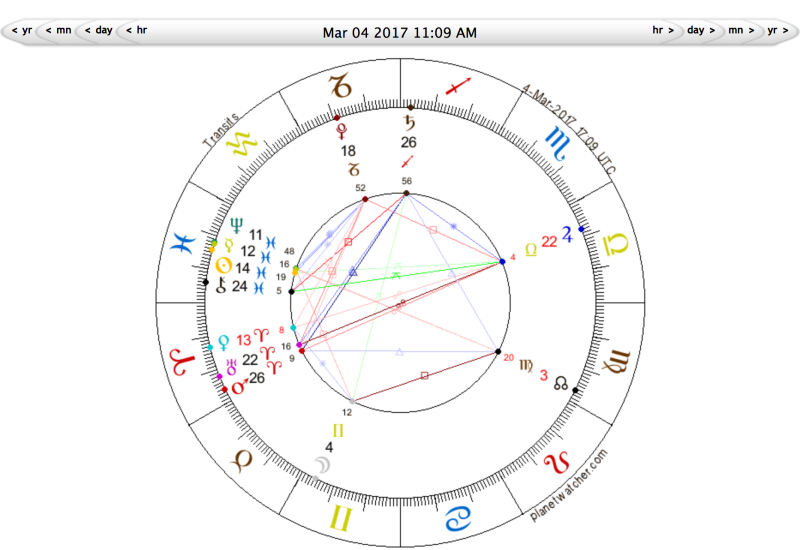 Venus in Aries joins the slightly fading-but-potent conjunction of energetic, sometimes aggressive Mars with unpredictable Uranus, both of which are in opposition to Jupiter in harmony-seeking Libra. Venus is the planet that rules Libra so to have Her in opposition to Her own sign where transiting Jupiter resides can spell volatility in relationships. Venus asks us to reevaluate, like we would when contemplating a business deal, what return on investment we’re receiving for all the energy we’re putting into our romantic and financial partnerships. Have you been energetically and emotionally investing more than your fair share and receiving a paltry ROI? Or, conversely, have you been on the receiving end of largesse while unfairly putting in a solid effort on your part? (Remember: Libra is all about fairness in relationships.) The energies of Mars and Uranus are pressing for immediate changes to rectify any imbalances–up to and including the severance of all ties, so breakups/divorces in already-shaky romantic relationships/marriages and terminations of dubious contracts are likely to happen at this time.

The chart also highlights the intense t-square between Jupiter-Uranus and Pluto (known as a cardinal t-square because these planets are all currently transiting the cardinal zodiac signs of Libra [Jupiter], Aries [Uranus], and Capricorn [Pluto]). This dynamic energy really forces us to make an Underworld descent into our deepest fears about love, loss, and longing as well as face our Shadows/issues stemming from the lower-vibrational energy spectrum of the Venus-Pluto square. These low-vibrational energies often manifest as obsession, jealousy, keeping hurtful secrets, engaging in adultery or otherwise blocking intimacy with one’s partner(s), engaging in power plays (Pluto is obsessed with power), or experiencing shame and guilt related to personal sexual expression. At its worst, this energy manifests as outright sexual predation/abuse of others. Clearly, these are deep issues to address as Retrograde Venus squares Pluto. For individuals as well as for struggling couples, this is an excellent time to begin therapy: let these archetypal Underworld energies bring hidden issues to light in the service of healing.

Retrograde Venus in Aries will have a different thematic focus for each of the 12 Sun Signs. I’ve devised a simplistic chart below of the Signs and Houses affected, but please note that when Venus Retrogrades into Pisces on April 3, the House before the one appearing in the table below is going to be reactivated in your life. For example, my Sun Sign is Virgo, so Venus in Aries is currently affecting my solar 8th House of Other Peoples’ Money (e.g., a partner’s resources or payouts from investments, tax returns, royalties, alimony, inheritances, windfalls, etc.); when She backtracks into Pisces, however, She’s going to re-enter my 7th House of Marriage/Partnerships.

For all Signs, however, there are some basic tips to keep top of mind when navigating a Venus Retrograde period. Many of them have to do with keeping the adage “All that glitters is not gold” in the forefront of your awareness because what seems to be appealing to you during a Venus Retrograde often prompts the opposite outlook of What the hell was I thinking?! once Venus goes Direct:

And here are some important dates related to Venus’ transits and aspects to keep in mind during this period, whatever your Sun Sign:

Many people have confided to me that Venus Retrograde periods are a thousand times worse than Mercury Retrogrades. That’s because Mercury when Retrograde doesn’t hold up such a lens of self-scrutiny the way that a Venus Retrograde does, and confronting the Shadow Side of Love is never easy. My advice is to take heart from the courageous example of the goddess Inanna. In the Underworld, we are stripped bare of our sense of who we thought we were, our expectations of the future, and our cherished illusions of the present and the past. From that point of extreme vulnerability, the only way to move is to Ascend.

And know that on the other side of our personal and collective ordeals, we will be able to reach out with upraised arms and songs of praise to the newly risen Morning Star.

So shall it be!

4 thoughts on “Venus Retrograde 2017: Inanna in the Underworld”